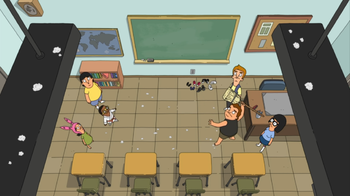 "Even I am offended by that one."
"If I gave you your money back, Randy, would you just leave right now?"
—Bob
Advertisement:

When Zeke worries his latest prank might get him sent to a reform school, his friends agree to sneak into school on a Saturday and hide the evidence (including a reluctant Tina, who would rather have Jimmy Jr. all to herself). Meanwhile, Randy talks Bob into letting him shoot an independent movie at the restaurant.