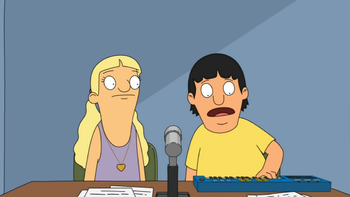 "Welcome to the rest of the announcements with Gene and Courtney!"
Courtney: We used to date.
Gene: Now we just collaborate.
Advertisement:

Gene and Courtney Wheeler become the popular new announcement duo at school. But their success is threatened by burgeoning feelings and an angry Ms. LaBonz. Meanwhile, Tina and Bob both nearly mess up the school's "Donations for Carnations" drive, and struggle to set things right.