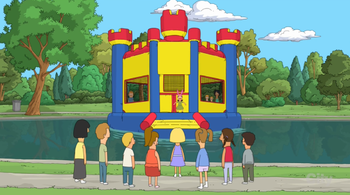 "It's our bounce house now, Dahlia!"
"God this is a disaster."
—Sylvester Stieblitz about the party
Advertisement:

Louise takes over Rudy's birthday party, and attempts to steal the bounce house from a rival party. Meanwhile, a pigeon gets into the restaurant, revealing that Bob is terrified of birds.

Is That a Real Pigeon?

Example of:
Confirm Before Reveal

Is That a Real Pigeon?