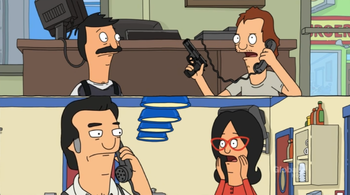 "Maybe I'll shoot a hostage!"
"This is gonna be fun you guys."
—Mickey
Advertisement:

Bob begins an unlikely friendship with a bank robber when he gets stuck in a hostage situation on the bank at his street.