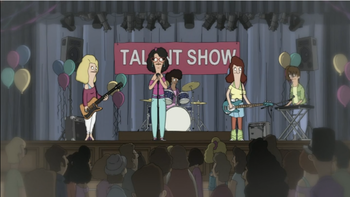 "We're the Ta-tas
We're gonna rock ya..."
"She wants my high school band to play there, and I don't want to be humiliated all over again!"
—Linda

Linda gets her old band back together for her high school reunion, while Bob deals with the mother of all pimples.