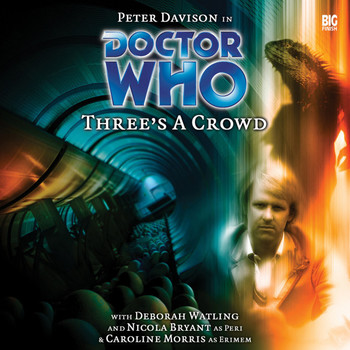 Erimem is still recovering mentally and physically from the whole business in Tibet, so the Fifth Doctor and Peri try to cheer her up and convince her she's a welcome member of team TARDIS no matter what. Erimem is thinking of leaving the TARDIS and just finding a quiet place to recover for a while — but before she can finish that train of thought, the TARDIS lands them on a deserted spot in space and Erimem is transmatted somewhere else.

While Peri complains about Erimem always having to play the Damsel in Distress and never getting a break, the Doctor befriends the local friendly dictator, "Auntie". The woman is the leader of a small colony, and every few years, she selects people who can be transmatted home. The colonists, for their part, spend their entire lives in their rooms, only talking to others via chat (with their webcams turned off) and the occasional — very occasional — social visit by transmat.

Erimem and Peri both separately befriend a few colonists, who freak the hell out once they realise that someone is near them and touching them and they have to talk to two people at the same time. The Doctor calls Auntie out on her regimen, but Auntie explains, with sadness, that she really has no other choice. Also, there's a race of warlike reptilians eating people and waiting for their eggs to hatch.

Once Erimem knocks out a lizard guy (with a bit of coaxing from the Doctor), Five goes off to tell Auntie (Hey it's Deborah Watling!) about the deadly guests while Peri and Erimem try to get the 16 remaining colonists to understand the concept of "doors" and "corridors" and "outside". As it turns out, Auntie knew about the lizards munching on her crew, but really tried her best to protect the people she loved — she was just waiting for the terraforming project to finish, and sacrificing humans to pacify the lizards in the meantime. Luckily, the project is done by now, and after the lizards are blown up, the rest of the Human Popsicle crews of the other ships can be thawed out and re-intergrated into what's left of society. Five assumed that Erimem will stay to rule as their queen, but Erimem won't have it and decides to just stick with team TARDIS.