Recap / Big Finish Doctor Who 032 The Time Of The Daleks 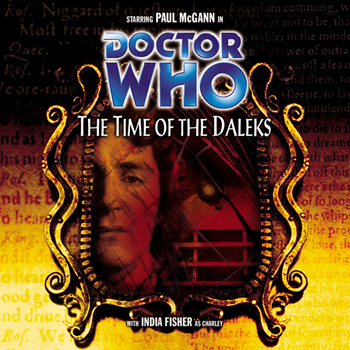 In which a scatload of time paradoxes hit the fan.
Advertisement:

The final part of the multi-Doctor Dalek Empire arc. It sees the Eighth Doctor's first run-in with the Daleks, the culprits behind all the continuity conundrums in his stories, and the reason why a certain famous poet keeps cropping up in his conversations.

The Eighth Doctor is shocked that Charley has never heard of William Shakespeare, something that should be quite, quite impossible. When he remembers that Orson Welles suffered from the same problem, he gets just a bit scared. He travels to Britain in the near future and discovers a general obsessed with Shakespeare, and more disturbingly, Daleks who quote Shakespeare and profess an appreciation for Earth's greatest playwright.

The general's up against a rebellion, who are clinging to what's left of their Ripple Effect-Proof Memory in order to protect Shakepeare's heritage. She's also working together with the Daleks to create a time machine. The Daleks, for their part, need a time machine for their own purposes, and claim that they've already been to Gallifrey and (after a bit of a failed invasion) made their own Eye of Harmony. The last bit of work can be done by the Doctor. They take Charley along in order to secure the Doctor's help. The Doctor isn't exactly up for it, but he's intrigued by the general's time portals, which also happen to lead back to all the eras of "Seasons Of Fear". (Well, that explains a thing or two. Probably.)

As it turns out, the general made a pact with the Daleks because she's the world's biggest Shakespeare fan, and the Daleks promised her that she'd be the only one to remember Shakespeare, therefore making the man her own private intellectual property. True to Dalek form, of course, they meant that they'd turn her into a Dalek and give her a nice complimentary Shakespeare data disc. An alternate timeline in which the Daleks have always been the masters of Earth is slowly becoming reality. Also, the Doctor realises that La Résistance has used the time machine to take Shakespeare out of his own time in order to prevent him being taken out of his own time. And the bookish, terrified kitchen boy in the base happens to be named Will.

However, that still isn't what's causing all the paradoxes. And even as the Daleks are trapped in a time bubble and little Will is returned to Stratford-upon-Avon, time continues to unravel. Charley's paradoxical nature itself is the key, and her being captured by the Daleks has enabled them coming to Earth in the first place and conquering humanity in the divergent timeline.

An ominous narrator confirms that time itself is in a dire state.