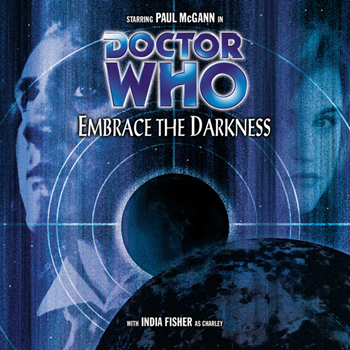 The morning sun has NOT vanquished the horrible night.
Advertisement:

The Eighth Doctor runs into a flotilla of Type 70 TARDISes in the Vortex, and steers around them, thinking it must be the Flag Day of Rassilon or something. (Yes, of course he's wrong, but that's not important right now.)

So instead of paying attention to the plot, the Doctor and Charley travel to the remote Cimmerian System to unravel the mystery of its disappeared sun. Darkness has embraced the scientific base on Cimmeria IV, leaving its three resident scientists blind and hopelessly lost. When Charley and the Doctor find them, they discovered that the scientists' eyes have been literally burned away. And one of them has gone insane from the experience.

The culprit is a tiny, innocent-looking little thing: a Cimmerian, whose body has adapted to the lack of sun by having evolved a sensory system based around taste. When the creature realises that its victims are now missing something called "eyes", it makes a Heroic Sacrifice to restore them.

The Doctor, however, doesn't know that, and has decided to finish what the scientists came for in the first place: a giant web of artificial suns. And that's when he finds out that the light of the suns will attract a species called "Solarians", who were long ago the reason the Cimmerians turned off the sun in the first place.

In a panic of guilt and self-loathing, the Doctor put Charley in the care of the scientists and goes off to save the day (and possibly make a Heroic Sacrifice or two, if he gets a chance to). Charley won't have it and follows him, with a good helping of What the Hell, Hero? Eventually, they figure out that the Solarians once lived on the planet with their sickness, and were healed compulsively by the Cimmerians at the cost of the Cimmerians' own lives. As a group of innate healers, they were unable to turn away the sick, and instead took the only other option: they turned off their sun and hid. Now, centuries later, they've evolved rapidly to live in perfect darkness.

The Solarians eventually arrive — and the Doctor expects a full-scale invasion fleet, and immediately starts monologuing at them. This rather confuses the Solarians, seeing as they're actually just a friendly team of archaeologists investigating their old planet. The Solarians and Cimmerians were of the same race all along.