Recap / Big Finish Doctor Who 018 The Stones Of Venice 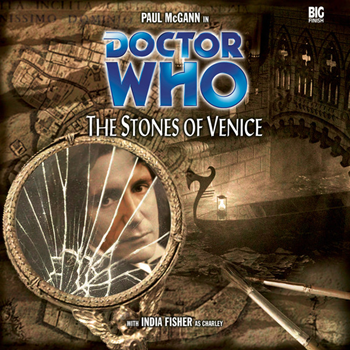 Ulysses S. Grant once said, "Venice would be a fine city if it were only drained." If he were alive in 2294, he'd say, "I told you so."
Advertisement:

The Eighth Doctor and Charley decide to take a well-deserved break from the monotony of being chased, shot at and generally suffering anti-social behaviour at the hands of others. The TARDIS disagrees and plants them right in the middle of the final day of Venice, several centuries into the future.

The local Duke has spent 100 years mourning his lost love, Estella, who cursed him to live a full century after he carelessly wagered her life in a card game. She also cursed the city to crumble and succumb to the water after 100 years.

While the Doctor befriends the curator of the Duke's museum, Charley befriends a gondolier named Pietro, and the two groups are separated without even noticing it. Pietro convinces Charley (with the help of some hypnotic drugs) to impersonate Estella. He turns out to be part of a group of gondoliers who have developed gills over the centuries. Meanwhile, the Doctor and Pietro find Estella's tomb, but it's a bit empty. There's also a mad high priest who has started an Estella doomsday cult. The Duke, confused by all of the above, decides to play along with Charley's ruse, but a perfectly ordinary bystander turns out to be Estella in the end. She's also a vengeful alien who used alien technology, not some magic curse. The Duke convinces her to reverse the curse, which restores Venice, but sadly also costs both the Duke and Estella their lives. They embrace one last time and make a Heroic Sacrifice.

The Doctor thinks the whole thing was a great example of how silly humans can be. Charley disagrees and calls it a touching love story.