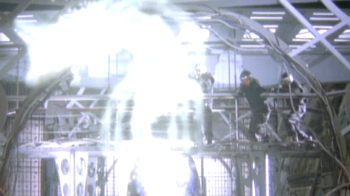 A Vorlon's true form revealed.
Once again, please remain calm. Right now our greatest enemy is fear.
-Susan Ivanova
As Ivanova makes an announcement about the Vorlon attacks, and worlds that are accepting refugees, a woman in the docking area is frantically trying to reach her husband when she suddenly collapses. The crowds make no move to assist her but they suddenly part as someone approaches, offering her a hand. Sheridan guides her to over to where Zack is watching and leaves her with him. She seems in awe of meeting Sheridan, something Sheridan and Lorien discuss as they walk off.
Advertisement:

In his quarters, Garibaldi keeps tabs on them, specifically Lorien. He's very suspicious about him, even for Garibaldi. Zack tries to ask if he's ok, and Garibaldi nearly bites his head off. He's getting tired of everyone asking him that, pointing out that Sheridan supposedly died but no one's asking him if he's alright. Zack just tells him the doctor want to make one more exam, then he'll be cleared for work. Before Zack leaves, Garibaldi admits that part of what's bothering him is that Sheridan has hardly spoken to him since they got back.

On Centauri Prime, Cartagia has summoned Londo to the palace garden. He and Morden tell Londo that the Vorlons have gone mad, destroying any world the Shadows have influence. Londo notes that there are over a hundred Shadow ships on world, and insists they be removed. Morden refuses, saying they'll never attack a major world. Cartagia is too set on becoming a god to turn Morden down. After he leaves, Cartagia takes Londo to meet his "friends" so he can share his latest brilliant idea. Sitting in front of the severed heads, Cartagia says how one of them came up with the idea of turning Centauri Prime into a pyre to illuminate his ascension to godhood. Londo is speechless, which Cartagia takes as agreement.

Back on station, Franklin is examining Garibaldi, including a check for scarring on the back of the neck. He doesn't find anything and deems Garibaldi fit for duty. When asked, Garibaldi can only guess that he got caught in the backwash when the Shadows jumped out. As Franklin starts pulling off his gloves, Garibaldi has a flashback, but says nothing about it. As he leaves, Sheridan comes in and asks about some tests he requested.

Ivanova continues giving updates on the situation, including the loss of three refuge worlds. Sheridan watches in his quarters as Delenn comes in. He notes that Ivanova is afraid, something he's never heard from her before. After an awkward moment, they begin to talk. Delenn tries to apologize for not telling him Anna might still be alive, admitting she's been afraid he'd come back and not be able to forgive her and she'd lose him again. He assures her that he's accepted what happened and let everything go, except for her. She gave him a reason to come back. Delenn embraces him, and they hold each other close.

Later in the war room, Ivanova, Franklin and Garibaldi are discussing the overcrowding the station's experiencing, Garibaldi saying it's only going to get worse. Every ship for light years in every direction is coming there and they don't have the resources to deal with the ones who are already there. Franklin suggests Epsilon III, since it's never been touched by the Shadows and there must be supplies down there.

Sheridan agrees, then turns to a security topic. The Vorlon ambassador. He wants to get rid of Ulkesh so they can deal with the Vorlons without eavesdropping, but he won't say how so Ulkesh can't glean anything from Garibaldi's thoughts. Garibaldi is about to gather a tactical team, but Sheridan says just a few people he can trust. Garibaldi heads off, muttering about falling on his sword, while the others look rather disturbed. Lorien comes in with Lyta. She's had her part explained to her, and will do her best while Lorien warns them that the Shadows could kill Kosh because they were both First Ones, and that an enraged Vorlon is more powerful than they can imagine. Sheridan explains that they need to be able to move without Ulkesh reporting on them, so they need to take out the Vorlon, anyway they can. In his quarters, Ulkesh lurks.

Garibaldi and his team arrive at the Vorlon quarters and he asks Ulkesh to leave, but the Vorlon is predictably stubborn, and refuses. When one of them approaches, Ulkesh knock him back and they open fire, their PPG blasts doing nil as Ulkesh throws lightning at them and emits a high-pitched sound that shatters their face masks. They retreat before they suffocate.

Sheridan is in his quarters when Londo calls, probably collect, asking if there is any truth to the rumors of the Vorlons attacks. He asks how far they are from Centauri Prime and Sheridan tells him a week. When asked if they are doing anything about it, Sheridan says they have an idea, but there are no guarantees. Londo, realizing the Centauri are on their own, thanks him and signs off.

Lyta comes to see Ulkesh, warning him about the attack, but Ulkesh has already dealt with it. She then tells him there's still a piece of Kosh that someone's keeping from her. Ulkesh finds this intolerable, and she leads him out.

Before long, Ulkesh begins to suspect something, but she manages to get him into position where raw electricity is pumped through a series of transformers into his encounter suit while security comes in and starts shooting until the suit bursts open.

Ulkesh, now seen in his true form, begins attacking everything in sight while his ship begins trying to get away as well. Delenn, who had come up to see this, tries to help a fallen guard, but catches Ulkesh's attention. As he strikes at her, Sheridan moves between them, taking the blow himself and is immobilized.

Lorien comes in and tells Sheridan, "Now!" Sheridan turns and releases another, golden-colored Vorlon, the last of Kosh, with bits of Sheridan and Lorien thrown in. The two Vorlons fight each other until they take it outside, up the sides of the station, and onto Ulkesh's ship where they all explode in a blinding flash.

Delenn rushes over where Sheridan lies fallen, but Lorien says his life force must be replenished and lays a glowing hand on Sheridan's back.

Delenn: Is this how you brought him back from Z'Ha'Dum?
Lorien: I give of myself to replenish him. For a little while.
Delenn: How long?
Lorien: Long enough.

As Sheridan wakes up, Delenn holds him close, while Lorien goes off to recover.

Londo waits for Cartagia in the throne room, where he expounds upon an idea he had, and something Cartagia himself overlooked. Once Centauri Prime is gone, there will be no one left to remember, and more importantly worship, the great god Cartagia. The solution, Londo says, is to take G'Kar to Narn and have his trial there, where his wisdom and greatness would be seen by all. Cartagia agrees, and begins making arrangments for the trip.

At Babylon 5, a massive fleet is gathering to end the war once and for all.

Garibaldi: And then what?
Ivanova: "And then what" what?
Garibaldi: Well if we lose there is no "then what", and if we win then what next? We're still renegades, I don't think there's anybody left on this side of the galactic core that we haven't already honked off. We can't go home. Sometimes I don't know what scares me more, winnin' or losin'.
Ivanova: God, I thought I was depressing.

Delenn comes to Sheridan's quarters, where he and Lorien explain what really happened on Z'Ha'Dum, how Lorien found Sheridan dying, or dead, and managed to revive him with his own energy. The test Sheridan asked about earlier was a complete scan of himself, which showed some kind of energy sustaining him. But it's only temporary, and Lorien says it will only be up to twenty years.

Lorien: And then, one day, he will simply stop.

Sheridan asks for a moment, and after Lorien leaves he and Delenn discuss, he's ok with it, but Delenn isn't. She feels it's only getting him back to lose him again, but it's still twenty years he wouldn't have otherwise. He then, awkwardly explains the concept of the engagement ring to her until she realizes he's asking her to marry him. Her response is a deep kiss.

In G'Kar's dungeon, Cartagia is personally overseeing arrangements, though he doesn't like the way G'Kar is looking at him. Londo doesn't offer any suggestions, and after he leaves, Cartagia decides to have G'Kar's eye plucked out, casually picking one, then leaving as the prison door is shut.