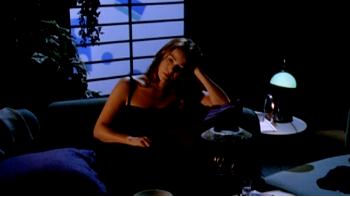 When you just stay up at night and worry.
You ever heard of the Hour of the Wolf? My father told me about it. It's the time between three and four in the morning, when you can't sleep and all you can see is the troubles and the problems and the ways that your life should have gone but didn't. All you can hear is the sound of your own heart. I've been living in the Hour of the Wolf for seven days.
—Susan Ivanova
Advertisement:
As the new year begins, G'Kar is writing of recent events.

G'Kar: It is now seven days since we lost Captain Sheridan and Mr. Garibaldi, and in a way I think we have also lost Ivanova. It is as though her heart has been pierced and her spirit has poured out through the wound. She blames herself. It is foolish, it is destructive, it is...human. Ambassador Mollari has returned to Centauri Prime to take up his role as Advisor on Planetary Security. I suppose he is quite happy with his new position, it's what he always wanted, power, title, responsibility. I think he is more alone than anyone else in the universe. Delenn has refused to eat for seven days, fasting, praying and waiting. Delenn believes, I think she is the only one who does. The Shadows have paused in their pursuit of war and everywhere there is a sense of imminent change. Whether it is a change for good or ill, no one can tell, because no one has yet answered two very important questions: where is Mr. Garibaldi? And what happened to Captain Sheridan at Z'ha'dum?

Ivanova is sitting in her room after a sleepless night when her computer activates its wake-up call. She drags herself off to a meeting with the League of Non-Aligned Worlds. She wants to press the advantage now with an attack on Z’Ha’Dum itself, but the League is being as stubborn as ever. They are convinced the war is over and with the rumors coming from Z’Ha’dum are convinced Sheridan has been killed. Ivanova, Delenn and G’Kar are not able to sway them and the ambassadors stalk off. Lennier comes up to Delenn and notes that he didn’t come. Delenn says she intends to find out why.

Minister Virini is escorting Londo to a meeting with Emperor Cartagia, something Londo is not all that enthused about. As they enter the throne room, they see the emperor admiring his crest, which is much shorter than would be expected for one of his station. Cartagia says that it allows him to go places that the emperor would normally never go. And he's seen things... After a few more minutes discussion about what the emperor does in his spare time, he tells Londo why he called him there. He needs someone with experience with the other races, who can see the big picture. He also orders Londo to handle some arrangements, but doesn’t say what they are. Cartagia also says that Londo was requested for this positon by someone.

Vir is in Sheridan’s office with news. He tells Ivanova that he's learned from Londo's sources what happened when Sheridan went to Z’ha’Dum; he was seen falling into a 2 mile chasm right before the White Star crashed into the planet carrying two 500 megaton explosives. The good news is that he’s thrown the Shadows into chaos, but that doesn’t make it any easier. And with any luck Morden won’t be around anymore.

True enough, Morden, his skin caked with burns, is on Centauri Prime. He surprises Londo in his quarters and says they have much to discuss. Londo tries to ask about Sheridan, but gets only cryptic responses, other than the fact that Morden is the one who requested Londo be assigned here. He informs Londo that the Shadows are going to move forces off of Z’Ha’Dum in case others try to take advantage of the situation. Cartagia has agreed to let them use a small island as a base.

Londo doesn’t like the idea, but those who opposed have vanished. Morden reminds Londo that Cartagia is his responsibility, but Londo says he won’t do it. Morden just tells him to be ready when they arrive.

Delenn waits in the Zen garden for Ulkesh. She pleads with the Vorlon to help her keep the League together, but her hopes are dashed as Ulkesh does not seem to care despite everything Sheridan did, but he does say something of interest

Ulkesh: He has opened an unexpected door. We do now what must be done now.

Delenn tries one more time to convince him, but Ulkesh leaves. Lyta offers her sympathies before following.

Zack is by Garibaldi’s quarters when he sees the door open. Going inside he finds G’Kar inside studying the room, his possessions and household god, Daffy Duck (the Egyptian god of frustration). G’kar finds that most appropriate. He intends to leave and look for Garibaldi.

Londo is looking for his coat when Virini comes to take him outside. Londo grabs his old purple one and follows, stopping in horror when he sees a fleet of Shadow vessels flying overhead. He runs off the see Cartagia, trying to talk him out of it, but Cartagia won’t hear of it. When Londo tries to forcefully demand it, one of the guards holds a knife to his throat. Cartagia seems to think the Shadows have the power to make him a god, something for which he is glad to sacrifice countless subjects. Londo retreats from the throne room.

As he leaves he expresses his misgivings to Virini, but the minister warns him to keep it to himself. Others who had them have disappeared.

Virini: They say there is a desk somewhere upon which he has all their heads arranged in a row. They say he speaks to them late at night.

Ulkesh is drawing part of himself out of Lyta, something she doesn’t like as much as when she carried Kosh. She begins to think he’s up to something.

Londo calls Babylon 5 and talks to Vir, asking him to come to Centauri Prime ASAP. At the same time, Cartagia comes to speak to his "friends", a set of severed heads all arranged on a desk.

Lyta goes to Ivanova’s quarters to find her having another sleepless night, and downing a drink. She tells Lyta about the hour of the wolf, that time in the morning when everything that’s gone wrong comes back to haunt you. Lyta has come to offer a chance to find Sheridan. They need to go to Z’Ha’Dum, but Lyta thinks she can keep the Shadows from noticing and maybe even sense Sheridan. Ivanova agrees.

The White Star arrives at Z’ha’Dum and jumps into normal space. They begins scanning while Lyta falls into a near trance keeping the Shadows at bay. Ivanova sends a signal and Delenn tries to reach him through Lyta, but the only ones who hear them are the Shadows. Before they are overtaken, the White Star suddenly returns to hyperspace. Lennier explains that he programmed the ship to jump back if he were disabled.

Susan and Delenn talk a bit about what they heard. Delenn can only describe it as a voice of infinite sadness. They both heard the voices of their fathers, Ivanova shaken that she actually wanted to go down. Instead she orders the "Getting the Hell Out of Here Maneuver", which Lennier is only too happy to oblige. Delenn asks if he picked up anything at all, but there was no reply signal right up to the end. Crushed, they can only return home.

Back on Z’Ha’Dum, a figure moves through an underground tunnel, dropping a command bar.

Vir meets with Londo who, after scanning for listening devices, explains what his intention is. He tells Vir the emperor is insane, offering the Shadows a base in exchange for godhood. The others know, but no one is willing to do anything, except them. That is why he called Vir there, he needs someone he can count on, a friend and a patriot. Vir agrees to help. They must do what is necessary to preserve their world: kill Emperor Cartagia.

Ivanova is in her quarters again, and tearfully enters in her log the death of Captain Sheridan. Now they have to finish what he started. She has some ideas how to do that, but has to let him go.

On Z'Ha'Dum Sheridan is huddled in front of a small fire when a tall figure emerges from the shadows.

The alien asks if he can share the fire and Sheridan lets him. The figure sits down, and the two exchange stares, each measuring the other up.