Recap / Avatar: The Last Airbender "City of Walls and Secrets" 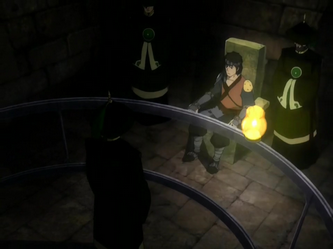 Jet is brainwashed by the Dai Li.
"You want a show? I'll give you a show!"
—Zuko

Finally arriving in Ba Sing Se, Team Avatar tries to get to the Earth King in order to tell him of their plan to invade the Fire Nation and get his support. However, they find themselves hindered by their tour guide Joo Dee, and soon realize that Ba Sing Se is not the idyllic capital they were led to believe.

Meanwhile, Zuko and Iroh try to acclimate to their new life as refugees in Ba Sing Se, while Jet tries to expose them as Firebenders.