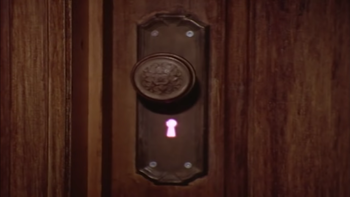 "Children who make noise in the library must be punished!"
While Frank escorts Tucker to the campfire via a headlock, Kiki suddenly calls for quiet. The others wonder what’s up. Kiki wants them to consider the concept of total silence. Gary and Sam suppose such a thing to be impossible. What if it were? What if every audible indication of life was somehow stopped? Submitted for the approval of the Midnight Society, Kiki calls her story “The Tale of the Quiet Librarian.”

On a school trip to the public library, a teacher herds the young class to the children’s section. At the end of the procession, a boy, Timmy, bounces a small green ball, which rolls downstairs. To the far end of the downstairs hall, Timmy pursues his ball, where it stops before a door marked “Quiet Reading Room.” He accidentally pushes the ball beneath the door, whose keyhole exudes a strange pink glow. He opens the door, and cries out in horror - but in mid-vibration, his voice is abruptly and utterly erased from audibility.

For a history project, Laurie Napier is paired with Jace Ellman. While she’s content with the arrangement, her friend Carla commiserates, with an assertion of Jace’s conceitedness.

Meanwhile, while Jace is content to be paired with Laurie, his friend Brian commiserates, with an assertion of her aloofness.

In the bustling corridor, Laurie overhears Jace laugh at Brian’s unflattering impersonation of her. The two get off to an uncomfortable start.

In the public library, Natalie escorts her little sister through the library, and is distracted by the pink glow behind the keyhole of a door marked “Quiet Reading Room.” As she stares, the door swings open. Natalie’s scream of terror is, within a second, abruptly and utterly silenced. Her sister, having wandered off, returns to find no sign of Natalie.

On the ground floor, Laurie forbids Jace’s contribution to the research. Further provoked by his operation of a portable sound effects box, she sends him downstairs for some more books.

Downstairs, Jace discreetly slips on a pair of spectacles, and searches. Across the floor, a small green ball bounces to a stop at his feet. He follows the direction of the ball, and bumps into a librarian, giving her a fright.

Back at their table, Laurie chides Jace’s late return, and instructs his further abstinence from contribution. Having had enough, he walks out.

Outside, Laurie demands his return of the library book. Weary of teamwork, he concedes.

Next day at school, Jace turns out to have left a book in the library basement. Laurie entreats him to retrieve it. He agrees, on condition of his inclusion of their shared project.

At seven, they meet at the public library. However, the library is closed. Jace climbs a vine railing and attempts to open a window. Out of luck, he climbs back down. Suddenly, the window rattles and opens.

In the dark, quiet library, Laurie lowers her bag onto the copy machine - or rather, the spot where the copy machine used to be. The bag falls at her feet. She looks around, and realises all the computers to have vanished.

With some trepidation, the two head for the basement, where lies Laurie’s notebook. On the way, Laurie finds and takes an oil lamp.

As they cautiously enter the darkened basement, Jace notices it to have changed - many of the books are gone, and at the end of the hall stands a door marked “Quiet Reading Room.”

On the wall by the mysterious door, Laurie finds a calendar dated 1910, across which hangs a key. She slips it into the keyhole of the mystery door. Jace is suddenly uneasy.

Inside, bookshelves are heavily strewn with cobwebs - as is a long table, and several seated, anachronistically dressed children whose heads slump lifelessly across it. On closer inspection, a few of them stir to turn pages. Nearest the door, not yet strewn with cobwebs, sit a small boy and a teenage girl. They turn to behold the visitors, and scream silently. Overcome, Laurie also screams.

Jace and Laurie flee the room and close the door. Across the darkened hall, another door opens. A middle-aged woman in a solemnly dark dress and dark glasses holds a square box, which bathes her face in a dim purple glow.

Laurie supposes her to be Mrs Hurley, but this is not the librarian she knows. This Librarian sternly forbids talking in the library. Jace demands the woman’s identity. She lifts the lid of the box, which exudes a dark pink glow, and advances with it.

Jace’s cry of protest is suddenly silenced, and succeeded by the Librarian’s mocking laugh. Before the librarian can strike again, Laurie pulls a filing draw across the hallway, and urges Jace away.

Back on the ground floor, they barricade the door. With Jace unable to speak, they search for a phone - but all modern technology has been removed. When the door repels its barricade and opens, they drop to their knees and crawl away.

In the next room, Jace mimes an indication for them to split up. Laurie nods, and heads back upstairs.

The Librarian arrives, and carries her glowing, shrilly humming box upstairs after Laurie, and steadfastly pursues.

However, from another hallway, jaunty music draws her away. Meanwhile, Jace frantically winds the crank of a gramophone.

The Librarian raises the box in the direction of Laurie’s voice, and silences her.

Laurie and Jace throw the sound effects box back and forth, and take turns making noise with it.

As the Librarian closes in on Jace, Laurie pushes over a plinth-mounted bust, and bumps the Librarian, causing her to drop the box. Laurie touches it, and is rewarded with a brief humming sound. The Librarian picks up the box, but at a bombardment of electronic sound effects, struggles with it.

The pink glow suddenly discharges a shaft of white light. From inside the box float ephemeral shades of various faces, each contorted in a scream…

From upstairs approach footsteps. A security guard agitatedly asks what the two kids are doing in here. He turns on a light - and sees on the floor, amidst a pile of ashes, a pair of dark glasses.

With their voices back, the two announce to have found, in the Reading Room, the missing kids. They lead him into the Reading Room from which Natalie and Timmy calmly emerge. While the flustered security guard leaves to make a report, Jace and Laurie, in the abandoned Reading Room, hear the distantly laughing voices of the children imprisoned here over the decades.

While the police investigate, Jace and Laurie sit on a bench, and ponder their adventure. A police officer hands Laurie her notebook, and declares the two free to go. With their flair for teamwork reappraised, they leave to work on their dual homework.

Kiki closes with an announcement of her need to return some library books - does anyone want to come along? The rest of the Midnight Society suddenly seem urgently busy, and take their leave. Satisfied at having delivered a case of the creeps, Kiki follows.