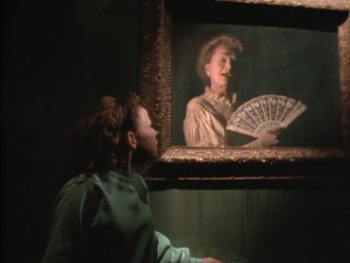 "The sun's going down, and we can live!"
Through the trees, most of the Midnight Society hurry to the clearing. Tonight, warns David, is full moon on leap year: the spirits are free to take innocent victims. Frank scoffs. On the edge of the clearing, they abruptly halt. Before the fire is a black-cloaked, hooded figure. It turns, revealing the stark white face of a skull. Whatever this is, Kristen has had enough, and prepares to bolt. The apparition lowers its mask, revealing the face of Betty Anne. This mask, she explains, is for their protection. Every four years, on the night of a full moon, so goes the old superstition, the spirits hunt: as they do in her story. Submitted for the approval of the Midnight Society, she calls it “The Tale of the Whispering Walls.”

On a drive home from Play Land, Claire and Andrew Dickens are coaxed away from bickering by babysitter Louise with a prospect of banana splits. To one last jibe from Claire, Andrew responds with a gust from his battery-powered propeller fan.

At a fork in the rural road, a sign points to the number nine highway. Surprised, Louise had thought the turn to have been earlier. As they drive on, the wooden sign falls away, revealing the original sign to point in the opposite direction…

At the Whisper Inn, Louise stops the car for directions. In the deserted, wood-panelled pub, a voice angrily demands the door to be shut. Stood by the bar, a long-haired man in a black suit explains his loathing of drafts. Louise explains herself and her charges to be lost. The man, Raymond, cryptically says they’re right on time. He advises them to take a nearby dirt road through a wood.

Meanwhile, Andrew applies his propeller fan to a hanging set of wind chimes. A further glance at Raymond shows him to have very quickly relocated to behind the bar. As they leave, he ominously chuckles…

On the edge of the woods, they approach a semi-stately redbrick house. Along the driveway, the car grinds to an unexpected halt. Louise tells the kids to stay put, and goes in search of a phone. As she prepares to knock on the door, it creaks open. As she enters the darkened hallway, the door closes behind her.

Some time later, Claire decides to follow her in. Andrew, conscious of the order to stay put, hesitantly follows. Shortly after Claire knocks, the door creaks open. In the shaded hallway, the door swings shut behind them.

Up a flight of stairs, they find a long corridor, rowed with empty picture frames. The two follow the chimes of a music box to a room, still shaded, but merrily adorned with drapers. A table, set with a carousel-themed music box, is set with dishes of banana split. Unease gives way to delight, as they suppose this to be a surprise party planned by Louise.

As Claire tries for some of Andrew’s banana split, the dish is knocked to the floor. The ice cream begins to smoke and dissolve, leaving a dark hole in the floor, in which the glaring face of Raymond laughs mockingly. With a gloved hand, he grips the edge of the hole. In fright, the siblings run for help.

Back at the Whisper Inn, a jukebox plays a sweeping instrumental, to which waltz a young couple in 1920s party wear. A bald, bearded man and a young man, both dressed in tweed, linger respectively at the bar and jukebox. A middle-aged woman in a white Victorian dress, Violet, brings drinks to a table. All have a slight, faded pallor.

Claire addresses the gathering with a report of the missing Louise. All respond with quiet perplexity. Violet offers a conciliatory dose of punch. A full moon on leap year, say the 1920s couple, has allowed for this little gathering, and that after sunset, Louise will be fine. Violet warns otherwise, and mournfully compares her daughter Jane to Claire.

The young jukebox attendant dismisses all need for worry: on sundown, all herein will live again to party. Claire asks who lives in the nearby house. The question is, he replies, who’s the house living in?

The man at the bar says the house belongs to Master Raymond. And with that, he opens his case, and invites them to buy a brush.

Outside, the bemused siblings suppose their most practical option to be to find a phone. They go back inside, only to find the bar to have been instantaneously deserted, with chairs stacked neatly on tables. They’ll just have to find Louise themselves.

Back at the house, in the murky hallway, numerous disembodied voices whisper for release. The clearer voice of Louise calls to Claire and Andrew. They follow her voice to the living room. In a mirror, the face of Louise urges them upstairs. She then fades, to be replaced by a maniacally laughing Raymond.

The siblings run back to the front door, which is stuck. Andrew suggests he stay here, while Claire searches. She entreats his assistance, and earnestly admits his knack for distinct insights. Cheered, he follows her upstairs.

Down the darkened corridor, as they pass each framed empty canvas, it ignites behind them with the luminous image of those encountered at the Whisper Inn.

In what appears to be a nursery, on a creaking rocking chair, Louise hums, and cradles a small, swaddled shape. She reassures them that when the baby falls asleep, they can all go. Andrew notices something odd about the swaddling, and hastily retreats. Louise’s voice suddenly deepens to that of Raymond’s. “Louise” passes the “baby” to Claire, who screams in fright, and puts down the swaddling - which holds not a baby, but a constrictor snake.

In the hallway, a frame ignites with the image of Violet, who again mournfully compares her daughter Jane to Claire, who screams and runs to the end of the corridor. She calls for Louise, whose distant voice answers. Between two candles, mounted in brackets shaped like human hands, a frame holds a protruding sculpture of a face. Its lips move, and the voice of Louise calls for help. Claire pulls at a candle, and the wall swings forth, taking her into a secret room.Downstairs, by the front door, calls Andrew. The door swings open, and a breeze blows in. Recalling Raymond’s hatred of drafts, Andrew pulls out his propeller fan.

In the secret room, Claire finds Louise unconscious on a wooden chair, From the corridor outside calls Andrew. She instructs him to pull on the candlesticks. As he prepares to do so, the stone face comes to life, with the likeness of Raymond, who laughs scornfully. With his fan, Andrew wafts air at the scary face, which, with a puff of smoke, fades.

In the secret room, the two siblings find Raymond standing behind the entranced Louise. On sunset, says Raymond, Louise’s soul will serve as sustenance for his continued life, and for the house. Andrew picks up a vase, and hurls it a blank frame, which shatters to admit a blast of air. Raymond instantaneously vanishes, and Louise wakes from her trance. They flee.

Down in the hallway, the open front door swings shut, and Raymond steps seamlessly through it. Andrew aims his propeller fan...whose batteries seem to have run out. At a gesture from Raymond, the device flies out of Andrew’s grasp. With a command from Raymond, both Louise and Claire fall back under his spell. As Raymond dismisses Andrew, Violet steps seamlessly through a wall. She opens the front door, and before a breeze, Raymond fades to fog.

As Violet urges them out, Claire touches her hand in thanks. No longer in the mood for banana splits, they drive off.

Some time later, on the same spot, another car grinds to a halt. The driver gets out, consults his map, and looks resignedly at the house…

On the 29th of February, when the moon is full, Betty Anne closes, the house continues to claim unwary souls. She re-dons her skull mask, and the others argue about who should be first to set off home…