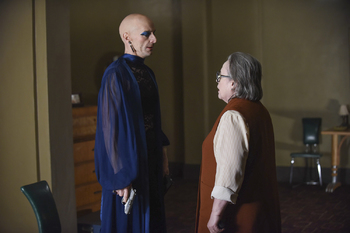 Ramona draws vitality from an unlikely source. Sally uses her past to negotiate her future. Scarlett learns the truth of her family's affliction. Queenie checks into the hotel.

Liz loads a revolver and hands it to Iris, who heralds the arrival of Elizabeth. They plan their raid on the penthouse and enter, guns blazing. Donovan attempts to be a human shield for Elizabeth, who is hit but makes a hasty exit. Iris and Liz carry the severely injured Donovan out the door to the curb as he pleads not to be trapped as a ghost with her former lovers. He asks if he is safe before he dies in the street.

Sally digs the bullets out of a screaming Elizabeth in the dungeon, as Elizabeth was able to make it to the body dump chute. Elizabeth wonders why Sally saved her, and she responds that she "needs" her and won't be left behind again. Sally demonstrates her mastery of anatomy, remarking that they don't call her "Hypodermic" Sally for nothing. Elizabeth insists that she will not leave Sally. Sally relates her story about former neighbor, a drug dealer, and her former associates: grunge musicians Nick Harley and Tina Black. The two treated her like an artist, not just a drug hookup. Sally brought them to the hotel after a recording session of one of Sally's songs, and they shot up with heroin. Shortly before they overdosed, Sally playfully stitched their three bodies together and to the mattress. The Addiction Demon manifested and tortured her from days 3 to 5 that she remained before ripping herself away.

The Lowe family returns home. Scarlett wonders how long it has been since anyone was in the house, which has spoiled food. She also wonders how to explain Holden, or how the Afflicted will obtain blood. John says that he will take charge of gathering what their reconstituted family needs.

Elizabeth reveals that she must drink Afflicted blood to heal, and Sally tells her that Donovan (the likely donor) is dead. Sally brings the remaining towheads for Elizabeth's harvest, but their "Mommy" is afraid it will kill them. They offer their help anyway, since Iris and Liz are likely to kill them regardless. The saddened mother is emotionally sickened (but alive) from the fatal result.

Liz incinerates Donovan and brings Iris his ashes, in a Campfire Gold coffee can. She wants a few moments to commune with the ashes (which she dumps from a shortening container onto the bedspread and runs her fingers through. Later, Hazel asks if Iris had an accident (as she is coated with ashes). Iris responds that she wants every mote of ashes vaccumed up, and she heads to the roof to face the dawn.

Iris and Liz discuss freeing Ramona as a weapon against Elizabeth (having failed to kill her themselves). They were unaware of the Lost Boys and Will being inside, but are terrified when they discover Ramona is already free. Ramona is skeptical about their loyalties and she assumes that Elizabeth sent them to finish her off. They try to mollify her, and she feels ill. She needs to take a fresh life. They are about to bring in someone off the street and are armed to do so, and they find Queenie (reserved for three days, prepared for an enchanted The Price is Right ticket). Liz recognizes Queenie from her coven's announcement on CNN. They lead her to her room, but Queenie is reluctant when she sees danger signs and a dark sensation in the room. Ramona emerges from behind a shower curtain and slashes at her. Queenie reveals that she is a witch (and her power), which Ramona thinks will make her strong. After a fight, Ramona is seriously injured. March materializes and intervenes, stabbing Queenie. Queenie's power does not work on ghosts, and she can't disable him. Ramona drains her dry, and March reveals that he wants Ramona to kill Elizabeth (on premises), but that Elizabeth can't suspect he's behind it.

John returns home with a victim for Alex, but she is missing and a Hotel Cortez key is left behind. He tracks back to the indicated room, where Sally is waiting. He wants to know what she has done with his family, but she reminds him that she can't leave the premises. She tells him that March has taken his family after John broke his promise to him. He just needs one more kill.

Ramona confronts Elizabeth, but Elizabeth convinces her old lover for one more round of sex and then she'll let Ramona kill her. Ramona's fate is not obvious, but Elizabeth is packed and ready to leave before she's gunned down by John trying to enter the elevator.

John's final kill is "Thou Shalt Not Commit Murder", and he presents Elizabeth's head as a trophy to an elated March. Sally wants John dead (to be with her). March wants him alive (to continue killing off-premises). John just wants to get back to his family. He leaves to look for them.

March asks Hazel when first she realized she was a ghost, and her reaction. She was confused, but March guided her. March expects Elizabeth will be similarly confused. The doorbell rings, and he leads Elizabeth in. The new ghost feels like all her driving passion is gone. March tells her that he can finally forgive her for turning him in to the police, and after 90 years she admits that she didn't. Hazel admits that she did, so that she could have him to herself, so that they could die together and be together forever. Hazel reminds him that she has always shown him her loyalty and love, in contrast to Elizabeth. Hazel hopes that he will finally accept her as his lover. He spurns her instead, saying she is banished from his presence. Reluctantly, she feels strangely free that she no longer has to wait on him and his "whore". Elizabeth wonders what Hazel will do without being his sycophant, and Hazel retorts that there are always more stains. She leaves the eternal husband and wife to their toast, as Elizabeth cries.