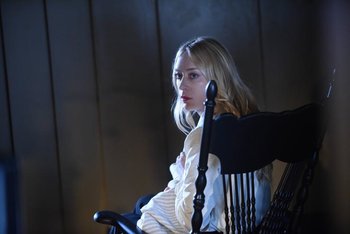 Ramona and Donovan enact their revenge. Liz finds true love. The resident of Room 33 is revealed.

In 1926, a yellow taxi delivers Elizabeth to the Murder House. Charles Montgomery is surprised that she is only 3 weeks into her pregnancy, and very distended. Based on the thermometer, Elizabeth had already been turned. He gives her sedative gas, and cuts out the fetus. Elizabeth's baby boy attacks the nurse, and Elizabeth wakes enough to kiss her son.

John's increasingly confused murder board adorns the wall, and he wakes to a greeting by Holden. He runs after his son, happening upon the glass coffins where his son, wife, and the other children sleep.

Tristan and Liz have a tryst. Liz introduces her new paramour to books by (a) Bronte and Oscar Wilde. Liz explains that only after her transition did she feel free. Tristan asks if Liz is falling in love with him, and Liz is unsure; Tristan says that he is falling in love with her. They cuddle, and Liz explains the finer points of being a (transgender) heterosexual girl. Liz is unsure about having betrayed Elizabeth, but Tristan thinks she'd understand.

Elsewhere, Elizabeth and Will have sex. Will's erection falters. She summons Tristan to join them, and Liz bids Tristan not to mention that they are together. Tristan balks upon arriving, explaining again that he is not gay. Elizabeth compels her protege to help out for the next hour, regardless of his tastes.

Alex is frantic, having drugged John with Versed after he discovered the sleeping chamber. Liz leads her to the cleaning supplies so that the coffins can be moved.

John awakes again to Alex, who says that he called her and that she'd found him unconscious in the hallway. Alex says his "vision" of a pool filled with coffins is from Scarlett's description and that he's having a psychotic break. She follows him down to the now emptied sleeping chamber. Liz and Alex destroyed the glass sarcophagi.

Elizabeth, in a flowing, long-trained peasant dress, visits her son (in a crib) before leaving Paris. She says that she will return with a great deal of money.

Donovan and Ramona pay a visit to the hotel, passing by an apparently indifferent Iris. In the elevator, Ramona says she plans to kill the young towheads while Donovan heads to the penthouse. Ramona is unpleasantly surprised that the coffins are gone and confronts Iris about it (who is still high off the hipsters). Ramona's next stop: Room 33.

Upstairs, Donovan takes a sniff off Elizabeth's panties. Agnetha and Vendela ask him the way out, and he explains that until they find a purpose that they will stay trapped. Elsewhere, Justin bangs on a door demanding room service. Donovan relates a story of the suicidal teacher Cara, who decomposed into the water supply of the fifth floor. She found her purpose in terrorizing the guests. Donovan explains that the purpose will only fill their lives with meaning, but they still won't be able to leave. He says he lost his own purpose when he lost Elizabeth.

Ramona hunts Bartholomew in his room, and finds he tosses a toy ball in her direction to distract her.

Liz finds the door the Room 33 open and gasps. She tells Alex that there will be hell to pay if Bartholomew is not found before Elizabeth gets back. Liz serves Ramona a drink, and while she appreciates her return she must ask her to leave. Liz also tells her, before she is to leave, about her affair with Tristan. Liz and Ramona disagree in how violent Elizabeth's reaction will be once she finds out about them.

Alex discovers the tourists, who just wanted to stop walking. A guest offers Agnetha a ride, and Vendela joins them in their resulting tryst. Vendela takes an ice-pick to his neck in the bathroom, and that's the situation in which Alex found them. Alex explains that they need not kill the guests, only their minds. She begins to tell them of a man that wanted a night with two women...

John's latest crime scene is in a church where the televangelist pastor was stuffed with coins until he exploded. John is reminded that they don't need him (and that he's been fired). They have a suspect in custody.

Liz finds a drunken John in the halls, and offers to guide him to his room. Liz is concerned for John's safety, but he is intent on having his "breakdown" his way. He's approached by Agnetha and Vendela, who seduce him and then make out with each other after they stab him. He escapes, naked, to the front desk. He is unsure if it's his blood. They return to the gleeful Hazel, Agnetha, and Vendela. He shoos them out, and March appears, greets him, and welcomes his embrace to the Hotel Cortez lifestyle. John tries to pack and realizes he is totally bloody, which contaminates his clothes. He showers, observed by the scuttling Bartholomew, and makes his way to the front door rolling his luggage.

He picks Scarlett up on his way back to the house. Scarlett is upset that Alex has not returned her calls for the last two days, and questions why John is there, as he'd moved out. He seeks after his sobbing daughter after trying to unpack, and Bartholomew is hiding inside his luggage. Scarlett notices the bloody garment he's holding, and he returns to his room to find his clothes scattered. He gathers his gun from the closet and investigates, finding Bartholomew in the kitchen. He shoots at the creature, Scarlett not far away, and she recoils screaming.

Elizabeth, Will, and Lachlan return, and Will takes his son up to bed. She finds Liz concerned about something. She offers to pay for her sexual reassignment surgery, if that's her concern, but she says it's something else. Liz reveals to her that she and Tristan have been carrying on an affair for a few weeks. Elizabeth says that she doesn't share, but maybe when she's done with Tristan. Liz pleads her case again, and Elizabeth says they will talk it over.

John's partner drops Alex off at the house, concerned for John's health. Alex says he needs sleep in his own house, in his own bed; he realizes that she has moved to the hotel full time and he shuns her, locking her out. She follows a rustling in the bushes to Bartholomew.

Tristan greets Elizabeth, and she asks the two lovers to sit while she pours them each a drink. She says that she does not enjoy betrayal. He objects, saying that Elizabeth's great passion is abandoning those in her wake. She asks them if they truly want each other, and when they agree she slices Tristan's throat. "He's yours," she says. "Bury him."

Elizabeth leaves to find Alex and Bartholomew in Room 33. The infant was injured, losing a little blood. Elizabeth is impressed that Alex saved her son, and Alex responds that Elizabeth saved Holden. As Alex leaves, Elizabeth cradles her son. His face and head are largely unformed with a cleft palate extending well beyond the sinus cavity, an absent nose, sharp teeth around his maw, wide set and half formed eyes, and a bulbous forehead.