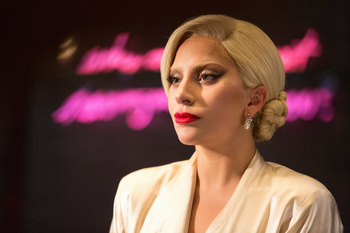 Alex's heart beats heavily as she tests her body temperature, finding it 75.5 degrees. She ambles through the hospital until she reaches Max Ellison's room. He has gone from pneumonia to a staph infection, and Mrs. Ellison asks if she should sign the proffered DNR.

Alex finds herself feasting in the broom closet on blood bags from the bank, and she takes a sample of her own, injecting it into Max's IV bag. He seizes before waking.

Donovan and Iris bang on Ramona's door at 4am. Her butler, Reeves, initially denies them entry. Ramona is enraged, but Donovan explains that Iris should be her new "inside man". Donovan also reminds her that Elizabeth has taken everything from her, and Iris notes that Donovan has turned his mother. They agree that because Iris is beneath Elizabeth's notice, she is a perfect turncoat.

Max was in full respiratory failure, but has made a "miraculous" recovery. They prepare him for discharge.

Liz questions Iris upon her return to the hotel, and offers the pallid woman some "hair of the dog". The astute Liz pours her some of Elizabeth's private stash of blood with a drop of triple sec. She reminds her that she will need to feed regularly. She's excited that the old woman has been reborn, but Iris is much more reluctant. She muses on an eternity of the invisibility of older women.

Max runs to catch the school bus in a pirate costume, having fed upon his parents in their kitchen. His class is decorating the classroom for Halloween, and his friend was worried about him. He explains nearly dying from the measles, and while they lean in for a kiss, he bites her lip. He offers some of his own to exchange. The teacher comes to check on them and he slices her throat. Max's friend is led to drink from her, and tainted snacks have infected the other children. The principal is the next meal for the hungry class. He barely escapes to the office, and the staff puts the school on lockdown. A SWAT team finds a trail of bloody and bloodied corpses throughout the hallways, and they escort the infected children out of the school. Max's friend Maddy tells a rehearsed story about a masked intruder, and the rest of the children follow suit.

John Lowe tells his lieutenant about the "copycat" serial killers at the hotel on Devil's Night, knowing how insane he sounds. John's reputation has been in tatters since his breakdown following Holden's abduction, and he is fired for instability.

Justin, a former photographer for Entrez-vouz magazine, and his girlfriend want a discount for being social media tastemakers. Iris leads them to Room 36, which they balk at. Downstairs, Elizabeth and Tristan head out costumed for the evening. They pass on a message for Will that he's invited to Demi's for a party. Tristan and Elizabeth notice that Iris is nervous and smells different, which she writes off as Halloween stress.

Justin wants a cheeseboard and grilled romaine from room service, which brings Iris to tears. They modify their order to pâté, and Liz is happy to oblige them with cat food on a silver platter. Liz and Iris begin bonding, and she mentions she's not homophobic. Liz responds that she's not gay.

She recounts her married life as Nick Pryor in 1984 Topeka, and her wife (whom she married for her dress size). She was a pharmaceutical rep for Eli Lilly, and she passed up the strip clubs for transvestite sessions in her hotel room. Her room service came with an unexpected visit from Elizabeth. She notes that her blood smells like a woman, despite of her dressing and acting as a man, which outs her as a transgender woman. She breaks down in sobs, noting the Countess' beauty (contrasted with her own "ugliness"). She says Liz doesn't lack beauty, she lacks commitment. She offers her a life as a goddess.

She makes her over, crafting the image of Liz Taylor. She offers to take her to the Roxy, but the trans-woman is afraid to emerge from the room. The Countess sends Liz on a trip for ice as a trial run, and she breezes through the hallway. She encounters her coworkers, and they wonder if she is gay, worrying if she has passed on AIDS to them. Elizabeth cuts short their taunts with slices to the throat and a philosophy lesson for Liz.

She never returned to Topeka, but continued sending money earned from her new job at the hotel until her children turned 18. She insists that Iris teach the hipster couple some manners. The couple watch the news and continue complaining (except for the "decent" pate). Iris snaps and stabs the man and the woman with the cutlery and corkscrew, respectively, and takes a drink.

John awakes again, this time scratched and in bed with Sally. She claims he practically dragged her into his room from the bar, where they had sex. He says she needs to go, and she recoils after their evening together. He claims he doesn't remember any of it, and she says he's lying; she also thinks it is their destiny to do it again and again, and that he can't fight it.

Iris thanks Liz for the inspiration in taking accountability, and they wheel the hipsters to the cadaver chute. The two finish off the wine the couple had ordered. Iris says it's ironic she never learned how to live until she'd died.

Elizabeth suggests Holden give his mother a kiss, as she is dressed to the nines. He wonders that she is just like him. Alex will be the children's new governess, and she will continue to live with them so long as she follows the rules. Alex is concerned about John's presence in the hotel, but a night invited to share Holden's coffin assuages her fears.