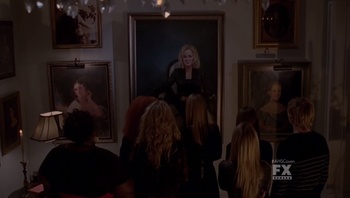 Cordelia's latest vision puts the coven's future into question. With Fiona's reign coming to an end, the other girl's powers start to manifest. Queenie's search for Marie Laveau leads her to Hell and back.

A silent film details the Seven Wonders: Telekinesis, Concilium, Transmutation, Divination, Vitalum Vitalis, Descensum, and Pyrokinesis. At the breakfast table, Fiona describes these to Queenie and the inherent dangers therein. Queenie doubts Fiona's motives, but Fiona swears that she is tired. Marie is missing, and Fiona waves off Queenie's inquiries. When Fiona insults Papa Legba, Queenie tells Fiona to show some respect. Fiona uses her powers to choke Queenie, saying that while she is still Supreme, she deserves respect. She tells Queenie that she will perform the Seven Wonders, or die trying.

Cordelia is searching for Misty and wants Madison's help by touching her. Cordelia notices that Madison doesn't want Cordelia to touch her. Madison develops the power of Transmutation, disappearing into another corner of the room, saying this proves that she is the Supreme. Cordelia says that witches can develop several powers and still not be the Supreme since witches develop more powers under dangerous times. She manages to get Madison to let her touch her, but still sees nothing, much to Madison's relief.

Queenie searches for Marie in the greenhouse and finds a puddle of blood left behind. She returns to her room and projects herself (with Descensum) to a vision of her old chicken shack (with an endless line of customers). Papa Legba tells her that she is in her own personal hell. Before she met the Coven, she was stuck in a dead-end job with people who treat her poorly and with no bright future, and her hell includes her being forced to serve an endless line of people. He says that Marie's immortality constrains her to Earth, and that she should get out of her hell before time runs out, or she will be stuck there. Just as a bossy customer orders, she manages to wake up and find Legba sitting near her bed. She gives Papa Legba hot chocolate with marshmallows while they discuss Marie and Delphine. Papa says that Delphine cannot die unless Marie does (since Delphine is made immortal only by Marie's tears), and Marie is still alive even though she was tortured and dismembered by Delphine, because of her deal with Papa. Queenie points out that Marie, whose body parts are scattered across New Orleans, cannot fulfill her part of the deal anymore because she cannot work for Papa, thus breaching their contract. Papa notes Queenie's craftiness, and agrees.

Queenie finds out that Delphine has gotten a new look and poses as the new tour guide for the La Laurie mansion. Delphine has taken over the tours and gives a more positive spin to her biography, calling herself a visionary and ahead of her time, despite the protests of the tourists. As the tour group leaves (disgruntled by Delphine's revisionist history), Queenie says that Delphine is a cliche and returning to the scene of her own crimes. After Delphine managed to lure the real tour guide alone in the attic, she notes that the guide is overestimating the number of tortured slaves. She knows because she kept a ledger. She hammers the guide's head and traps her in one of the cages. Queenie still thinks that Delphine can be redeemed with repentance but Delphine claims to feel no guilt for her actions, and pities how the modern world is full of lies with people who pretend to be sorry. Queenie responds by fatally stabbing the once immortal Madame.

In the legacy room, Fiona is sitting for her portrait and bickering with Myrtle when a nosebleed distracts her. She thinks she has weeks left and continues to lament her oncoming fate. Cordelia questions the wisdom of Queenie attempting the Seven Wonders and Fiona does not want to fight her. They discuss Cordelia's self mutilation and that the sight has not returned, but Fiona feels the power has not left her. Fiona gives her daughter her favorite necklace from Fiona's mother as a goodbye. This causes Cordelia to have a vision, and finds Madison stabbed on the stairs, Zoe impaled on the wall, Misty lying dead on the piano, Queenie with a dagger through her throat, and Cordelia herself with a gunshot on her forehead while wearing the necklace. She watches a healthy Fiona yanking the necklace off her daughter and wearing it. Cordelia realizes that she must act before Fiona has a chance to kill them all.

In his apartment, the Axeman is wary of Cordelia's visit. She saw the entirety of their relationship and explains that her mother has used him. In two days, she will flee the country. Cordelia tells him that there is not enough time for him to get a passport, so Fiona is planning to leave without him.

Cordelia searches Misty's room and tracks her (with Queenie) to Misty's crypt prison. Queenie telekinetically extracts the casket, and appears to use Vitalum Vitalis to revive Misty, who actually used resurgence to revive herself.

Myrtle discusses Misty's entombment with Madison when Zoe and Kyle return. They were in Florida when Kyle overreacted to a vagrant's intrusion, which Zoe repaired with her own vitalization. She returned to fulfill her destiny as the Supreme. A furious Misty bursts in to beat Madison, but when they reach the hallway, Kyle stops them both. The Axeman tries to intercede, but all the witches throw him into the staircase. Many question who he is, and Cordelia explains that he was the Axeman who Zoe managed to turn mortal and give him the power to leave. She examines the blood he's covered in, and discovers that it is Fiona's blood.

Fiona visits the Axeman, and he discloses Cordelia's visit. While her back is turned, he finds her travel reservations in her bag. She confirms her intentions to leave him, that she never really knew how to love him and always knew their relationship was limited to her enjoyment. He counters that he showed her how to live again, but she spurns him despite his efforts to make her believe that she truly loved him. He hacks into her with his axe before dumping her in the swamp for the alligators.

Kyle drags the Axeman away, but Madison leads the charge to kill the murder by taking his axe and hacking at his abdomen, and Misty, Queenie, and Zoe follow her with knives from the kitchen, ironically mirroring the same way the Axeman died for the first time (being stabbed by a group of witches for intruding into the Academy).

Delphine finds herself back in her attic, and is imprisoned in a cage. She finds her daughter Borquita trapped in the same cage she forced her daughter in, and feels so much pain and sadness for being in the cage right next to her daughter's, but far enough that she cannot touch her. She finds her other daughter flayed at the face, and another with her lips sewn shut. Marie appears and gives Borquita blood to drink when she says she is thirsty. She gets a hot iron poker and gives Delphine a choice: Marie will either stick this through Borquita's throat, or on her behind. Just as Marie is about to attack, she wakes up and realizes that she doesn't want to hurt Delphine's daughters because they did nothing wrong. Papa Legba says she must torture them all because he wants her to, and he owns her and both of them are in his own hell, Marie doomed to torture Delphine for all eternity. Marie pleads with him, saying she has done nothing wrong and has even helped others with her immortality, but he points out the number of babies she has sent him when she could have just breached the contract instead of sacrificing their souls, and that in the end, everyone sins so everyone must suffer. Marie reluctantly stabs Borquita with the poker, while Delphine is forced to watch.

Everyone admires Fiona's portrait, giving it empty compliments. However, Cordelia speaks the truth and says that Fiona was a remarkable witch but a horrible Supreme who ditched most of her duties, especially the duty of finding out who her next successor was. Without a Supreme, they would have to do it on their own: Since Queenie, Madison, Zoe, and Misty are all possibly capable of being the next Supreme, she tells them that on Sunday at dawn, all of them must participate in the Seven Wonders so that by next Sunday, there will be a new Supreme.