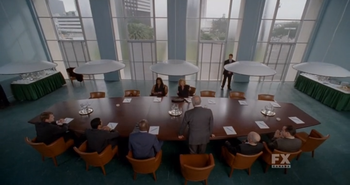 Fiona and Marie have a deadly face off with the witch hunters. Cordelia makes a desperate sacrifice to save the coven.

Delphine is agitated about returning to New Orleans from Paris. Borquita tries to console her, to no avail. Borquita is squeamish about cutting the head off a chicken (and other cooking until the kitchen help arrives), but Delphine is not (and is entranced by the spurting blood). Upstairs, a slave has an injured leg, and while initially Delphine helps to treat it, she later finds herself excoriating the man just to watch him bleed. She thinks she's going to like it in New Orleans.

Fiona delivers a eulogy for Nan, who "fell in the tub", which includes a mention of the new union with Marie. Queenie arrives with a leashed Delphine, to Marie and Fiona's dismay.

David reports to Renard that Hank's body will be identified by NOPD as a homeless veteran with PTSD. Harrison wants a reprieve from the witches, and calls to set up a meeting with Fiona.

Delphine internally muses on her childhood while ignored or scoffed by the other household members (except for Myrtle's gushing over her cooking). Marie openly threatens about what she will do to Delphine in the future. She notes the comings and goings of Fiona. Cordelia tries a vegetable potion to restore her sight. A bleeding black gardener reminds Delphine about what used to feed her soul, and she tortures him (albeit while he is bound and gagged) starting by clipping his toes off.

The Axeman plays for a dressing Fiona in his apartment. He invites her to spend her final days with him in his family's rural farm home. She laughs. He presses that once the new Supreme is dead, that they should run off together. She agrees, but bids that he must do her one small favor.

Spalding visits Delphine to admire her "art". She slowly realizes that he is a ghost. He has been watching her rudderless life lately, and he suggests that he knows how to help her. He stokes her hatred of Marie and suggests killing her. He thinks Fiona's actions (including the alliance with Marie) as threatening the coven he serves. He will tell her how to magically kill the immortal Marie if she retrieves a special item.

Cordelia welcomes Queenie back, but Queenie is upset at the changes since she left (not to mention Hank's spree). Queenie expounds that she survived the silver bullet, and spit it out. Queenie suspects she is the new Supreme and Cordelia should step aside and let her run things.

In the greenhouse, Cordelia examines a flower bud and prepares a potion for her eyes to restore The Sight, but failing that she pierces them herself with a pair of gardening shears.

Fiona searches for Cordelia, and Myrtle tells her that Cordelia is a hero now, protecting the Coven. Myrtle implores Fiona to go to her daughter and have Cordelia read her. Fiona nearly does, but turns to go downstairs instead.

Delphine has returned with the very expensive gift for him, a designer doll. The potion to restore her mortality is "Benadryl", but he hushes her before she can say the name.

Myrtle, playing the theremin, tells Zoe to escape with Kyle while she still can. She gives her a unique and expensive piece of jewelry to use for money, but Zoe will not leave. Myrtle reminds her that she has enemies everywhere and must leave. Zoe considers it.

The Delphi Trust men arrive for a meeting with Fiona and Marie. The men will make reparations to Marie and a 100 year truce in exchange for an end to the magical siege. Fiona counters with their dissolution and a private jet and a house. They refuse. The Axeman begins killing the men in the room until only Harrison remains. He mixes a coffee. He says that killing them will not end the war and tells her to go to hell. The Axeman tosses her an axe, and she hacks into his throat. Marie takes pictures with her camera phone and Fiona and the Axeman embrace.

The matrons toast a long friendship with champagne. Fiona tells Delphine not to wait up, as she leaves to see the triumphant Axeman.

Delphine stabs Marie in the chest, thinking that the antihistamine has made Marie mortal, but it doesn't. In the ensuing commotion, Marie cascades down the stairs unconscious. Spalding says that Marie can't die after all, but that Delphine should bury the body in a way that she can't dig out. He goes back to play with Marie's stolen baby, or as he calls the boy, "my own living doll".

Zoe wants Kyle to pack for their escape. Kyle is afraid of leaving and his uncontrollable rages. He tells her that his leaving is not her decision to make, but she insists and they flee to the bus terminal headed to Orlando.