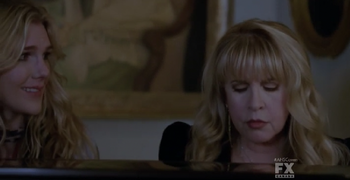 The Magical Delights of Stevie Nicks

Fiona attempts to out the new Supreme with a visit from Stevie Nicks. Cordelia learns the truth about Hank and the witch hunters. Madison tries to eliminate her competition for the supremacy.

Following from where the last episode ended, Fiona makes tea for Marie to help soothe her nerves after Hank's massacre and is making a spell to let her sleep. Marie laments sharing her weaknesses with Fiona, and that her immortality leaves everyone to abandon her to death. She thinks she's found a kindred spirit in Fiona. They agree to a truce until after Marie has rested from the massacre.

In the night, Marie is visited by her master, Papa Legba. He demands tribute and recompense for Marie's immortality. Marie wanders into a maternity ward and compels the nurse on duty to allow her entrance to the babies. After removing a baby, she is barricaded by two security officers. She warns them, then compels them to fatally shoot each other before she walks away, the ward behind her on fire.

The news of Hank's shoot-out in Cornrow City is broadcasted in the kitchen's TV, and Cordelia blames her harsh words at Hank prior to his massacre, when she told him she was filling for divorce, and that he did it only to protect her. Marie reveals to both Cordelia and Fiona that Hank was really her hired witch hunter, after he went to Marie to offer his services. Cordelia tries to deny it, which leads to Fiona slapping her, saying that she did not just marry a witch hunter, but exposed the Coven to a witch hunter organization, and following the death of Hank, they should prepare to attack it.

Fiona visits Misty in her room. Misty is aware of Fiona's hand at Madison's death and Myrtle's execution, and is defensive with Fiona, especially when she uses her over-used technique of enticing the girls with being the next Supreme. She assures Misty that being Supreme means getting fame and everything she wants, and then brings her down to the parlor to meet Stevie Nicks. After introductions, Misty passes out. Fiona says she won the bet that Misty would have passed out and Stevie owes her five dollars.

As the students return (not knowing Queenie's fate), they come upon Stevie in concert, playing "Rhiannon" while Misty twirls. Madison wants to know when Eminem will arrive, but Fiona insults her, saying that she is not his type, and more importantly, she is not the next Supreme. After a demonstration of shawl twirling from Stevie, she gives Misty the shawl she's worn in concerts all over the world and wishes her luck in the Seven Wonders.

Madison, Zoe, and Nan return to their rooms, with Madison storming in and lighting a cigarette. Madison is enraged that a swamp resident like Misty is to become their Supreme. When Nan says that she herself could be the next Supreme, Madison says being clairvoyant is nothing more than a party trick. Nan shows her new found power of coercion, by making Madison put out her cigarette and then making her stick it up her vagina, but Zoe stops her before she can do any real damage. Madison claims that she still is the next Supreme, and says that her resurrection has cured the heart murmur that once stopped her from becoming a potential Supreme, and Nan proves it to be true. She wants a Seven Wonders competition with Misty.

Through research, Cordelia finds that Harrison Renard, the head of Delphi Trust's asset management and one of the richest men in the country. The company was a branch of carpenters dating back to Salem. Photos show that Harrison Renard's son Henry Renard is really Hank Foxx, with Renard being the French word for fox. With the headquarters being in Atlanta, Marie wants to strike immediately, but Fiona wants to use a spell that will destroy the billion-dollar company. When Cordelia tries to help, Fiona shows that she is still enraged with her daughter and refuses her help. They curse the Trust with rats in a maze, and it shows the FBI arriving at the headquarters. Once a rat is killed in a trap, Fiona collapses.

In the hospital, Zoe and Nan talk about the disadvantages of Madison being the next Supreme. Zoe says that she thinks Nan could be the Supreme, and the Coven may need a kind leader like her to bring the sisters together. Nan notes that they might have changed Luke's room because she can not hear him, and is devastated when the receptionist tells her that Luke died the previous day.

Fiona wakes up to Marie filling her bedroom with a ritual to keep bad spirits away. Fiona pleads for immortality that she gave Delphine, but Marie says it will not cure her: it will make her live forever, but Fiona will live forever with incurable cancer symptoms. Marie reveals that she sold her soul to Papa Legba in exchange for immortality. Back when she was in her prime and a mortal, she was desperate to remain that way, and Papa Legba heard her and cryptically said he'd give her immortality if he'd come every year to her to claim something from her. She figured he wanted sexual favors from her, which she didn't mind giving in exchange for everlasting life. However, after the birth of her baby with Bastien, he comes back and take the baby, denying Marie's pleas to return her soul to keep her baby. Ever since, he has been returning once a year, asking for an innocent soul of a baby. She tells Fiona that he will come if Fiona wants him hard enough.

A funeral procession includes Misty and Madison. They discuss the Supremacy and Madison warns her about the politics of the job to sabotage her. Misty is not so easily fooled. Madison demonstrates a Resurgence of her own on a yet-to-be-interred corpse. Madison convinces her that Stevie's shawl gift comes with strings attached, and to deposit it into the now empty casket. Madison takes the opportunity to hit Misty over the head, knocking her into the casket. She takes the shawl for herself as two enchanted grave-keepers haul Misty's casket away.

Zoe and Nan plan to get Joan to tell them which funeral home Luke's body is in for them to bring Misty to bring him back to life. When Joan tells them a story of how Luke made a cross out of driftwood, Nan asks where his body is. Zoe says Nan meant to ask where the service will be held. Joan reveals that there will be a service, but she already had Luke's body cremated. Nan furiously calls her a bitch, saying she knows she killed Luke with a pillow. She forces Joan to drink bleach, using her telekinesis to keep Zoe from stopping her.

Cordelia has an emotional crisis in the greenhouse while Myrtle plays a theremin.

After a bad stock day, Delphi Trust is dying financially. Renard suspects the witches and plans a retaliation.

Fiona summons Papa Legba with an offering of cocaine, and negotiated life everlasting in exchange for her soul, even agreeing to give her daughter away just for the deal. Legba discovers that Fiona has no soul left to trade. The Axeman comes to comfort her. Fiona tells him that she intends to just kill ALL the witches, as she has nothing left to live for.

Zoe wonders if Nan is the Supreme, since she's only seen Fiona coerce someone into a self-fatal act before. Nan hears the baby Marie hid, and when confronted Fiona tells Nan to hand the baby back to Marie. Nan knows what Marie's intentions are, and tells them that the monarchs both have blood on their hands. They agree that Nan is dangerous and they drown Nan in the bathtub. Papa Legba is not happy with the substitution, but he escorts Nan to the afterlife. Her spirit claims anywhere is better than that house. He tuts that the two monarchs working together are big trouble.

Stevie Nicks plays the piano for a melancholy Fiona.