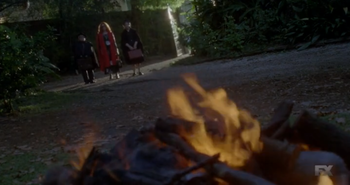 Besieged by Marie Laveau's undead army, Zoe unleashes a new power. Fiona and Myrtle clash over the control of the coven. Delphine is confronted by ghosts.

The governor of Louisiana, his wife, and his son, Jacques, attend Delphine's All Hallow's Eve Ball. Jacques is immediately taken by Delphine's eldest daughter Borquita, and Delphine challenges his masculinity by showing him her chamber of horrors. Delphine dares him to guess what he is grabbing at in two covered platters. He is horrified when he finds human eyeballs and intestines and he flees, followed by Delphine's mocking laughter .

Borquita laments to her half-sisters that she'll never find a husband because of their mother, the other two agreeing that they're treated just as bad as the slaves. Borquita implies that she intends to kill their mother, and the two go along. Delphine enters the room, telling them to go back downstairs to the party. Unknown to them, Delphine had heard their plot and has her husband bring Bastien and two strong slaves to her.

Later that night, the slaves take the girls and imprisons them in the torture chamber, with a slave breaking Borquita's leg so she can fit in the small cage. Delphine tells them that she will release them in a year, and will punish Borquita for thinking about murdering her mother by stuffing her mouth with feces on Christmas.

On the doorstep of Miss Robichaux's Academy the three undead La Laurie sisters confront their immortal mother, along with an army of the walking dead.

At the club where Cordelia has been attacked by a hooded assailant, Cordelia is screaming and crying because of her burning face, Fiona finds her moaning daughter wailing on the floor and demands to see the damage. In the emergency room, the doctor believes she was assaulted by sulfuric acid. They were not able to save her eyesight.

At the academy the girls are terrified, but Luke Ramsey thinks it is all a prank. He finds his way out the door. In Cornrow City, Marie is levitating on her ritual mandala. While Luke walks among the dormant zombies, Marie commands them to begin. They tear apart an innocent bystander. Luke tries to flee for safety but is struck down. Zoe takes charge and has the lights killed and curtains drawn. She then orders everyone upstairs. She tells Spalding to take Delphine and Queenie to his room but when he refuses she says to pick a room. Nan slips out the door and aids Luke to take refuge inside Cordelia's car.

Cordelia sleeps, her face a mask of burns. Fiona wanders the silent hallways seeking to replenish her pill supply from the repository, which she enters by magicking the key card reader. She stumbles through the psych ward after a hooded figure that she thinks attacked Cordelia. She enters a room of a new mother of a stillborn daughter and gets the mother to hold her baby and speak to it with comforting words. Fiona touches the baby and gives it life, walking away from a happy mother.

Zoe bangs some pots together to draw the dead army away. It serves to bring the entire hordes attention upon her. Zoe barely escapes and hides in the greenhouse. Delphine takes charge upstairs and orders Spalding to keep Queenie safe. Downstairs, getting some ice and a coke for Queenie, she hears a noise outside the kitchen window and finds Borquita quietly staring at her. Thinking that the corpse of her daughter still has a part of Borquita's humanity, she lets her inside and talks to her. Borquita responds with a stranglehold on Delphine's neck.

Queenie sends Spalding to find Delphine and, hearing a ruckus, finds him under attack by Borquita. Borquita leaves Spalding on the floor to chase the witch to her room. Queenie uses her powers to try to hurt Borquita, but it does nothing to stop her. Finally, Delphine stabs a poker through her daughter's heart, which is enough to kill the zombie. Delphine admits that Borquita could have had a better mother and killing her was probably the nicest thing Delphine ever did for her, and breaks down. Queenie comforts her.

Zoe charges to the aid of an exposed Nan and Luke with a chainsaw and quickly dispatches many of the intruders. The last zombie, a large man with a weapon, disarms her, and makes her fall. Zoe responds on instinct with a new power, impelling the cadaver to "be in your nature". The walking corpse falls, and Marie shrieks as she falls from her levitation, exclaiming that the witches now have real power.

Hank angrily barges into Cordelia's room and he squares off against Fiona. Hank declares that Cordelia hates her for not being the mother she needed and abandoning her, while Fiona says that she begged Cordelia not to marry him because he was a failure in life. Their arguing catches the attention of a nurse, who orders that one of them leave, or she will call security. The Supreme gives him 15 minutes to say his goodbyes to his wife before Fiona does things "her way" to get rid of him. Fiona exits, and Hank tells the sleeping Cordelia that he will never leave her. A touch of his hand, and Cordelia convulses with a vision of his infidelity.

Fiona, Nan, and Zoe incinerate the fallen dead army in the yard with a bonfire. Luke is asleep in Nan's bed. Zoe thinks Luke shouldn't stay here, but Fiona says that they need Luke to heal first and that his mother will probably just call the police. Fiona thanks Zoe for her bravery to help the coven and tells her that she will not forget it. Delphine enters and laments her poor mothering, and Fiona tells her she can understand what it's like to be a bad mother. She sees the Council staring at them from the gate, and she sends Delphine away.

The Council has arrived, and levies charges against Fiona for being a negligent Supreme due to the fact that nothing notable had happened to the coven until she arrived, and the students started getting hurt. They demand her abdication as Supreme, and when she asks who will be the Supreme while the next Supreme is not showing herself yet, they say that the Council will act as Supreme until the next one shows herself. Fiona accuses Myrtle of taking a backdoor approach to power, stating that since she was not chosen to be the Supreme, she is abusing her power as a Council member to become the acting Supreme.

Fiona also accuses Myrtle of being the one who attacked Cordelia. Myrtle denies it, saying she is more of a mother to Cordelia than Fiona was after Fiona abandoned her in the Academy, since Myrtle didn't want to have children of her own so she could devote her life to the coven. Fiona testifies that, after she resurrected the baby, she found the hooded figure entering the elevator and saw through the mirror that it was Myrtle. She also shows proof that she was in New Orleans under a false name at the same time Madison was killed, sneaking into her motel room and taking pictures of Myrtle's cork board filled with candid shots of Fiona. Pembroke says that it is good proof that could link her to Cordelia's assault and Madison's murder. Myrtle still claims innocence, but Fiona says that Myrtle's quasi-motherly love for Cordelia and devotion to the coven was overshadowed by how much Myrtle hated Fiona and wanted her to go down. Fiona rips off Myrtle's gloves and shows acid burns on her hand. Pembroke and Quentin unanimously decide on executing Myrtle by fire. Myrtle tearfully says that she was always different, which has lead her to this, and says that she will go and die without a fuss.

Myrtle walks to her pyre, where the menservants tie her up and pour gasoline on her while the other witches watch. Fiona asks for Myrtle's last words, and she proclaims that all present will suffer from Fiona's machinations. A flick of Fiona's cigarette starts the pyre, killing her.

The next morning, Fiona hides her pills. Queenie knocks and asks her if she just helped frame a guilty woman or an innocent. A flashback shows Queenie dipping her hand in sulfuric acid just when Fiona grabs Myrtle's hand, giving an unknowing Myrtle the acid marks. Queenie is having second thoughts about Fiona's plans and if she can handle it. Fiona has seduced her into believing that she will foster Queenie to be the next Supreme. Queenie agrees to trust Fiona's instructions.

Spalding, wearing a bonnet, dances while he sprays air freshener in his room. Madison's corpse is starting to decompose and stink, and when he tries to pull her out of a box, her maggot-infested arm falls off.

Misty shoos away dogs who are sniffing at Myrtle's charred corpse. She approaches it herself, cradles Myrtle's blackened head in her hands, and Myrtle's eyes fly open.