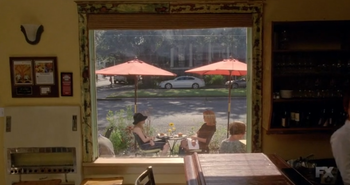 Fiona takes on an unlikely protege. A guilt-ridden Zoe tries to give Kyle his old life back. Madison has a fiery exchange with the new neighbour, Joan.

Fiona wanders downstairs in the middle of the night and contemplates her past.

1971 - A young Fiona and her predecessor, Anna-Leigh Leighton discuss how the new Supreme is chosen. Fiona tries to persuade Anna-Leigh to let her perform the Seven Wonders, the test only the next Supreme can complete, but Anna-Leigh refuses. Fiona counters that she can feel her powers getting stronger as Anna-Leigh ages and gets weaker, citing Anna-Leigh's health problems. Anna-Leigh slaps Fiona and calls her insolent, and says that she has seen a future where Fiona ruins the coven if she becomes the next Supreme. Fiona slits Anna-Leigh's throat and sees Spalding witness the murder.

Present day - Fiona sees Spalding watching her much like before, and taunts him about his missing tongue as she walks past him.

Fiona speaks to a plastic surgeon about how she is getting older and can no longer impress men, feeling she cannot succeed in life. She makes him let her watch a detailed video of a facelift procedure so she can better understand her own prospects, which upsets her.

Zoe visits Kyle's mother, Alicia, who reminisces about Kyle. She has found Kyle's drug stash and is dealing with her grief by getting high. Alicia over-shares with Zoe that she was on the verge of hanging herself after Kyle's death, and only stopped due to Zoe calling and asking if she could visit. She asks Zoe if she was his girlfriend but Zoe says they were just friends. Zoe assures Alicia that her son will return, but Alicia is doubtful.

Nan, Queenie and Madison watch as new neighbor Luke helps his family move in, commenting on his attractiveness. Luke's intensely religious mother Joan sees the girls watching him and makes him go inside.

Delphine watches a speech by Barack Obama on television, driving her to distress. Fiona informs her that black people are now fully accepted by American society, telling her to get over it. She says Delphine is now the academy's maid, threatening to imprison her again if she refuses. She is forced to serve lunch to Madison, Nan and Queenie, although she forces a confrontation with Queenie due to her racism. Fiona insists Delphine is now Queenie's personal slave, and she must do anything she asks.

Misty and Kyle lie in bed together, Misty singing along to Stevie Nicks and Fleetwood Mac. Zoe arrives, and is shown that Kyle's wounds have been mostly healed thanks to Misty's medicinal herbs and soils. Kyle seems to recognise Zoe somewhat. Zoe insists Kyle and his mother need to be reunited, and although Misty is doubtful she agrees and is distraught as Zoe helps Kyle out.

Nan and Madison visit their new neighbor's house, Nan equipped with a cake and Madison wearing a provocative dress that she aims to seduce Luke using. Luke mostly ignores Madison and is friendly towards Nan, not recognising Madison's celebrity. Joan insists they need to depart for a Bible study class, causing Madison to mock their belief. She telepathically embeds the knife used to cut the cake into the wall, shocking Joan, who forbids them from returning. She also exhibits pyrokinesis by setting the curtains on fire.

Cordelia and Fiona both visit their respective doctors, where a problem is found with both women's health. Cordelia is infertile and will be unable to conceive, while Fiona is told she will be unable to undergo any form of plastic surgery due to her declining health.

Zoe returns Kyle to his mother, who is shocked and overjoyed to see her son returned to her, although Zoe does not let Alicia see her.

Joan visits the academy to complain about Madison and Nan's visit to Fiona, bringing a Bible as a symbol of goodwill. An inebriated Fiona rudely mocks Joan, who threatens to call the police if they return. Fiona is intrigued at learning Madison exhibited pyrokinesis, and makes her telepathically light her cigarette when Joan leaves.

Cordelia goes to Marie Laveau's salon and speaks to her about a ritual she could perform to make her fertile again. Marie describes the ritual, involving Hank's semen, a hot pepper, and goat's blood. Cordelia is determined and willing to find $50,000 to pay Marie, but Marie admits she is teasing Cordelia, and she will not perform the ritual for Fiona's daughter. Cordelia begs, as Marie mentions Fiona's earlier visit has soured any chances of Marie cooperating with the witches.

Zoe returns home, and Nan telepathically senses her strong feelings for Kyle. Alicia calls her and tells Zoe Kyle is home, though he is changed. Zoe agrees to go and visit.

Madison and Fiona sit at a cafe together, discussing Madison's emerging powers. Madison mentions her poor relationship with her mother, and Fiona expresses dissatisfaction regarding her own treatment of Cordelia. Madison insists Fiona teach her all of her magic, exhibiting her powers of mind control by making a man crossing the road stop in the middle, causing several cars to swerve to a halt.

In the kitchen, Queenie demands Delphine cook for her, insisting she uses food to cover for her emotional problems. Delphine protests but sees something outside; it is Bastien, now transformed into a half-man, half-bull and sent to kill Delphine. He tries to break down the door, and Delphine admits her true identity to Queenie, informing her Fiona brought her back. Remembering tales of La Laurie's brutality, Queenie is incensed, but Delphine begs Queenie not to let Bastien kill her. Queenie eventually relents, sending Delphine upstairs, but not before she takes some of Delphine's blood to lure the beast. She goes outside to confront the bull creature.

Using Delphine's blood, Queenie lures Bastien into the greenhouse and speaks to him about the abuse he suffered at Delphine's hands. She tries to empathize with him, attempting to sexually entice him to prevent him killing anyone. Unfortunately, this does not work and he attacks her.

Alicia informs Kyle Zoe is visiting, wondering if Kyle has feelings for her and admitting she has held her son too close. Kyle becomes violent as his mother demands answers regarding his condition and attempts to seduce him again. He takes a trophy and violently beats his mother to death with it.

Fiona and Madison are playing pool at a bar together, Madison earning the attentions of multiple men. Fiona sees her younger self in Madison's seductive nature. Madison becomes more inebriated, as Fiona remains sober and aware.

Zoe arrives at Kyle's house and finds Alicia's body and a blood-soaked Kyle.

Madison and Fiona arrive back at the academy, where Fiona reveals Madison is the next Supreme, having sensed her growing powers and her own declining health. She claims she has failed in her role and Madison can succeed her. She admits she killed Anna-Leigh, and gives Madison the knife she used, asking Madison to kill her to succeed as Supreme. Madison is scared and refuses, and Fiona struggles with her, accidentally slitting Madison's throat.

A shocked Fiona looks down at Madison's body. Spalding watches from the doorway, as in 1971, and gives her a handkerchief to clean the blood off her hands. Recovering quickly, Fiona tells Spalding to bury the body deep.