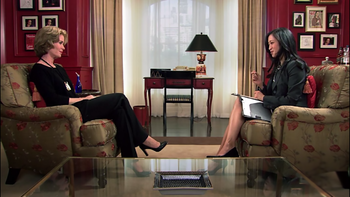 Johnny sets out to complete his father's work. Lana leads the charge to finally shut down Briarcliff.

Four months ago - Johnny Morgan wanders around Briarcliff, guided by an audio book entitled 'Tales from Briarcliff', an expose written by Lana Winters. He hallucinates scenes and people narrated by Lana, including his father, Dr Thredson encouraging him in his vendetta against Lana. As he meditates, he's interrupted by Leo and Teresa enjoying their 'haunted honeymoon' and is angered by their mentioning Bloody Face. When Leo sticks his arm into the secluded room Johnny is smoking in, he casually hacks it off and tosses it aside, donning the Bloody Face mask as he does so.

2013 - Lana is about to be interviewed prior to honours by the Kennedy Centre. Though she wishes not to discuss Bloody Face so as not to add to his cult figure status, she does agree to talk about the Briarcliff expose.She flashes back intermittently to entering the asylum with a film crew through the tunnels. She has since become a TV journalist with her series, 'America Unmasked'. The film, showing her walking through Briarcliff unchallenged amidst the dirty and damaged patients finally put Lana on the map. When she finally encounters an orderly, Lana voices her wish to see Judy, her old nemesis. They find Judy in a solitary cell, practically feral. Lana helps her up and shepherds her out of Briarcliff. Though touching, Lana admits that this part of the story is false. She was in fact too late to save Judy as the cell was empty when they arrived. She takes a break from her recollections and takes a water bottle from Johnny, the two exchanging looks.

1971 - Lana visits Kit and brings along her film crew. Kit is pleased to see her but not the crew. She asks him about Betty Drake, a patient whose record was found while filming in Briarcliff shown to be released into his care. Lana asks him if it was Judy and Kit admits that he went back for her after Alma's death. Though she began to recover, Judy went through violent spells and still believed herself to be Sister Jude. During one such episode, Kit's children led Judy out to the garden into the woods by the house. When they returned, Judy seemed to be miraculously back to her old self again. Following this rebirth, the four lived happily together until Judy became unexpectedly ill. After saying goodbye to Thomas and Julia, Judy refuses Kit's offer of food. She claimed that she wasn't alone as 'she' (Shachath) was with her. Just as before, the angel asks Judy if she's ready to which Judy confirms that she is. The angel bends down as darkness grows around them and kisses Judy.

2013 - The interview covers Lana's next expose, one on Cardinal Howard and his misguided hiring of Dr Arden whilst still the Monsignor. Though he attempted to avoid Lana's questioning, it drove the cardinal to suicide by slitting his wrists in the bath. In the present, Lana's own secret is revealed. The baby that had been aborted in Briarcliff was actually alive and Lana had had him put up for adoption. She tracked him down in the mid-70's and rescued him from a school bully but he didn't recognise her. She also discusses her guilt over giving him up. Lana later became godmother to Kit's children. Thomas became a law professor and Julia became a neurosurgeon. Kit contracted cancer at age 40 and though Lana only knows he disappeared, it's shown that he was spirited out of his wheelchair by the aliens.

The interviewers leave and Lana pours a drink for Johnny. Johnny describes his infiltration of the film crew although Lana recognises him instantly. She's been forewarned by police that he is a suspect of many murders. Johnny tells her that he did recognise her at the playground and he found the confession tape on eBay. She admits to him that neither of his parents loved him, despite Johnny's assertion that Thredson did. She confronts Johnny about what he wants and he puts a gun to his head. The irony of Thredson's hatred for guns is pointed out by Lana. She says that Johnny could never be a monster like his father before cradling his face and getting him to put down the gun. He begins to cry, feeling the guilt of his crimes. She says to him that it's not his fault. She raises the gun to his forehead and says that it's hers. She shoots and as Johnny's corpse bleeds out on the carpet, police sirens are heard. Lana remembers her first meeting with Sr Jude. She remembers their confrontation in the office and Sr Jude cautioning her ambitions as a reporter. She also remembers her telling her that 'if you look into the face of evil, evil's gonna look right back at you'.

Disturbed, Lana turns and leaves. Sr Jude momentarily looks satisfied at the statue of the Virgin Mary; both women unaware of the horrors they'll soon have to face.