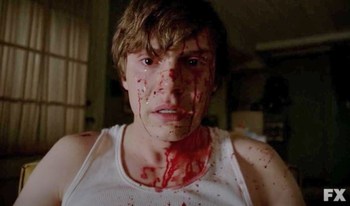 A deadly new inmate threatens Sister Jude's chance of being released from Briarcliff. Grace's obsession with the aliens turns violent.

1967 - Kit, Alma and Grace have been living together harmoniously with their mutual children. Kit's in the living room, wearing only bloody underclothes and holding an axe. In shock, he sits in an armchair. One of the children calls for him. He replies that he'll be there in a minute.

Earlier, Julia (Alma's daughter) and Thomas (Grace's son) are playing together in the living room. Grace sketches the aliens and Alma does housework. Kit arrives, discussing a civil rights march that the girls seem reluctant about. Kit believes it would be good to be among like-minded people. Later on, Alma rebuffs Kit's advances claiming she's worried that Grace is obsessed about the aliens. Fearing that she's dwelling on the past due to being unhappy in the present, Alma insists Kit spend more time with Grace. Grace disagrees; she's keeping a visual record of her experience so her children won't forget where they came from. As Kit and Grace begin having sex, Alma listens with dissatisfaction. Alma's unrest is disturbed by bright lights, normally a signal of the alien's arrival. Fearing another abduction, Alma crouches in the corner. Grace leads her out of the room and Alma realises that the lights were a hallucination and that they'd actually been attacked by a fire bomb. When the police arrive, Kit insists the culprit is Billy, the racist who antagonised him days before his arrival in Briarcliff. The police officer points out the rumours of Kit's family have gone around and that the relationship itself is illegal in their state. Grace comforts Alma in the house.

The next day, Grace speaks to Thomas in French. She encourages him to try and express his memory of the abduction by drawing it. This causes Alma to become more protective over Julia. Grace then encourages Alma to discuss recent events with her, including their differing opinions. Grace is grateful to be brought back to life and believes the aliens to be godlike scientists who will change the world. Alma, however, views her abduction with horror and likens the aliens to be like children pulling wings off of insects. The subject grows more tense as Alma tries to warn Grace against calling the aliens to come back for Julia and Thomas. She admits that she preferred her old life before Kit brought home 'an axe murderer'. Grace points out that Alma is just as imprisoned in this house as she was in Briarcliff. Alma slaps Grace, causing a rift between the pair despite Kit's efforts to mitigate.

A while later, Kit is unable to sleep. He visits Grace in the living room, who's still drawing. She tells him that she doesn't want to hide anymore and that they should embrace their future. Alma, having overheard them talking, hits Grace in the back with Kit's axe, fearing Grace's talk will bring back the aliens. Shocked and fearful, Alma huddles in the doorway, whispering that they need to hide. Kit kisses Grace's cheek. The story catches up to the opening scene with Kit pulling the axe out of Grace's back and sitting in the armchair.

1968 - Judy, Pepper and other inmates play a game in the day room, a few days after the assassination of Martin Luther King Jr. During the past year, Judy has regained a measure of her old authority within the inmates of Briarcliff, using the name 'Betty Drake'.

Monsignor Howard interrupts, telling Judy that he's working on her release due his promotion to Cardinal of New York. Briarcliff has been donated to the state and it will now become an overflow facility for mentally unwell prison inmates.In the bakery, Judy receives a visit from a stranger, physically identical to Shachath but with a raspy voice due to continuous smoking. She tells Judy that she's been transferred from county and that she plans to take over leadership, with or without Judy's support. More new inmates are admitted, including Alma. Under new ownership, 'Shachath' is Judy's new room mate and claims Judy as her property.

Pepper talks to Judy about the changes while the newcomer dominates the day room. She shakes an inmate roughly for not hoarding pills for her. In the cell, Judy hallucinates that Shachath is bending towards her to kiss her but is now speaking in the voice of the newcomer. She begins to hit the angel, only to be dragged off after having actually hit a seemingly harmless woman.

Judy wakes up in a straitjacket in a room she recognises as her old office. It now belongs to Dr Miranda Crump, the new government-appointed administrator. Dr Crump reminds Judy that she's reacted violently to five of her cell-mates in the past two months, something that puzzles Judy. When Judy asks if Cardinal Howard - who she still calls Monsignor- has sent word for her release, Dr Crump informs Judy that Howard was appointed as Cardinal two and a half years ago. This shocks Judy as her memory is so impaired that she recalls the Monsignor only leaving the monday previous. She doesn't recall that Pepper had died in the winter months when the asylum had been given to the state. As Judy tearfully breaks down, Dr Crump says that she will be given more medication to help her cope.

1969 - Lana's book, 'Maniac - One Woman's Story of Survival', has been top of the New York Best-sellers list for the past ten weeks. She reads an excerpt to an audience in a book store. As Lana reads a clearly fictional scene, she is confronted by a vision of Thredson who remarks about her salacious additions followed by Wendy who's angry at Lana's whitewashing their relationship. Thredson bitterly accuses Lana of being more interested in fame than the truth which moves her to tears. Lana wakes up to an adoring crowd, thinking that she was overcome by having to read about the past events.During the signing, a fame hungry Lana encounters Kit whom she hasn't been in touch with. Though she wanted to get in touch regarding Grace's death, she has been busy. She's recently signed over the movie rights to her book. Over coffee, Lana tells Kit her plans for a new book about Leigh Emerson. Kit angrily reminds her that she's supposed to be dismantling Briarcliff and that her ego has blinded her to the situation. He describes a visit to Alma he had, months before a fatal heart attack killed her. Lana was unaware of Alma's death and points out that herself and Kit are the last two survivors of Briarcliff. Kit corrects her: Judy Martin still lives.

2012 - Johnny Morgan returns to the bookshop where Lana did her reading. It's closing down and selling most of it's stock at a discount price. Johnny, however, is looking for an original, autographed copy of 'Maniac' and according to internet sources, the store is the place to get one. The clerk is unwilling to sell her copy that was given to her by her mother, even when Johnny claims his relation to Lana. Johnny persistently switches his offer of money to what he intends to do with the book. He plans to track Lana down, give her the signed copy of the book and introduce himself as the child she gave up. He'll then murder her, therefore completing his father's work. Horrified, the clerk gives Johnny the book.