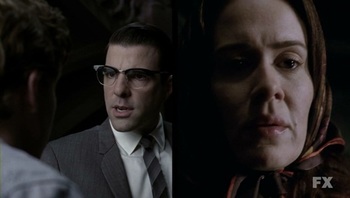 1965 - Thredson and Carl guide Kit to a session with his baby from his solitary cell. Pepper defends Grace and the baby from onlookers in the day room. When Kit enters, Grace happily tells him that she's calling the child Thomas, after her grandfather. Thredson redirects Pepper to the hydrotherapy room and the other inmates leave the family alone. Kit holds Thomas and asks Grace for answers from her disjointed memories. She recalls the implantation of a fetus outside of her. She also remembers that despite the alien's best intentions, they still make mistakes; one involving the death of Alma. Grace tells Kit that he is the link between the human and otherworldly life and that their baby is special. Kit responds by asking her to marry him.The Monsignor enters along with a number of staff and Sister Collette, a nun who intends to take the baby to a home for lost children. Kit and Grace protest, saying the baby isn't lost. The Monsignor and Sr Collette insist as Thomas won't be safe living in an insane asylum with two patients as his parents. Carl restrains Kit as Thomas is taken away. Thredson says that he will help them.

The Mother Superior pulls Lana aside to tell her that she's being released along with her patient record as evidence. She explains that she wants Lana to write an expose and dismantle Briarcliff for good. Before Lana leaves, she gets the confession tape and thanks a catatonic Judy; telling her she'll be coming back for her.As the disguised Lana makes her way down the stairs, Thredson tries to convince Kit to get Lana to hand over the taped confession. Lana sees this and realises Kit is distracting him from her exit. Thredson, noticing that something is up, runs to try to catch Lana leaving. However she is already in a cab. She holds the tape up to the window and flips him the bird as she drives off.When Thredson returns to his apartment, Lana confronts him with a gun. She says she's given the tape to the police and they'll be coming for him shortly. He responds that he's relieved and tired of living with his murderous secrets. He makes himself a Martini and waits as Lana trains her aim on him.

2013 - Johnny finishes as Pandora claims he has a 'mommy fixation'. He clarifies that his fixation is specific, that he feels abandoned by his estranged mother (Lana). Disturbed by Johnny's violent outburst, Pandora tries to console him which only increases his anger. She offers her other breast and sex to defuse him but Johnny instead snaps and begins to strangle her.

1965 - Lana wants to know what happened to Wendy and what Thredson did with her. Turning on the fire, Thredson explains that he was going to dispose of the body following the murder but instead kept the body on ice, 'for practice'. Being inexperience in the act of intercourse, Thredson attempted it several times with the corpse but could only climax after turning Wendy's dead gaze away from him. He disposed of the dismembered corpse after Lana escaped, scattering the ashes in the nearby area.Thredson goes to refill his drink, hearing the police sirens getting nearer. He guesses that Lana will never keep the baby now that she's out of Briarcliff so he can't expect to ever see it. She agrees with him, revelling in the fact that he'd be going to the electric chair even if she did keep the child. Contradicting her, Thredson says he'll be locked up as a 'clearly insane' killer and live long life in care. He over-confidently says that Lana is of no use to him now except as his last victim and goes to reach for a gun hidden in his drinks cabinet. Lana pre-empts his actions and shoots him in the head.

Months later, Lana lays a white rose next to Wendy's memorial at a crypt housing the cremated victims of Bloody Face. She's joined by her friends, Lois and Barb. Despite Lois' offer to be her house mate, Lana refuses and tells them of her plans to move to New York. Though her friends blame her troubles on Sr Jude, Lana disagrees stating that it's her instinct as a reporter that resulted in her misfortunes. Had she not been so dogged in her research into Briarcliff and Bloody Face, none of it would have happened to her. When the paparazzi arrive to catch the reporter mourning her dead lover, Lana's friends reluctantly leave; especially Lois who doesn't want to be outed as a lesbian.

In the day room at Briarcliff, Judy rejects her daily medication; saying she herself had signed for horse tranquilliser to be used on patients to keep them docile. When the nuns insist, Judy overturns the tray holding the pills.

Newspaper headlines claim Msgr Howard refuses to comment on Dr Thredson's hiring, now publicly known as Bloody Face. The Monsignor sees Judy in the day room, attempting to calm her about her disturbance. She vindictively reminds him of his deflowering by the demon possessing Mary Eunice. She questions if he'll renounce his vows but he responds by saying he prefers to 'stay the course'. Unsurprised by his dishonesty, Judy admits the sordid sexual nature of her fixation with him. As he turns to leave, Judy voices loudly of her pity and disgust at his single-minded ambitions. She claims that she's more sane now than ever before. The Monsignor asks the orderlies to take Judy to solitary.

Kit is presented with his release papers. Carl explains that he has no reason to be here any more as Thredson has been exposed as the killer and is now dead thanks to Lana. Kit visits the Monsignor to ask for Thomas' release to him. He uses his knowledge of Briarcliff as leverage. He also mentions a death certificate is on file for Grace and that can create a loophole for her own release, as long the Monsignor will sign over her 'body' to him.Together, Kit, Grace and Thomas leave and go back to Kit's old house. The house is still damaged from the initial abduction. Despite the happy atmosphere, Kit discovers Alma; alive and well, holding a second baby.

Elsewhere, Lana explains the circumstances surrounding her pregnancy to a woman who performs secret and illegal abortions. Despite the procedures being performed with actual tools stolen from a hospital, the abortions are dangerous and the instruments used are only sterilised in boiling water. As the procedure begins, Lana thinks of the horrors she's seen and undergone in the past year. She stops the elderly lady's hand as she starts, saying she doesn't want to add another death to the list.

A few months later, pregnant Lana discusses missing patients with detectives. The Mother Superior has been transferred to Puerto Rico and the only remaining witness is Judy Martin. They present a court order to the Monsignor, giving them full access to Judy. He tells them that Judy is dead, having hung herself and gives the number to the ashes kept at the asylum crypt for her ashes. Frustrated, Lana leaves. The rest of the facility is shown to be chaotic as ever except for one cell. It contains Judy, who's praying to Saint Jude for delivery.

Lana eventually gives birth but refuses to see or bond with the baby. The nurse brings in the crying infant, stating it's allergic to formula milk. She hopes Lana will change her mind upon seeing the ailing child. Lana at first rejects him entirely but eventually lets him suckle from her, affected by its screams. As the baby calms down, Lana sits back allowing her gaze to drift to the crucifix above her bed. In her view, it appears inverted.