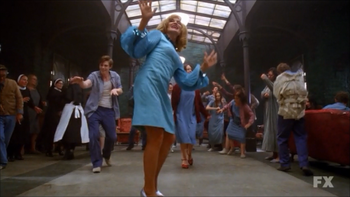 Arden pounds on Kit's chest to resuscitate him. Kit awakens and Arden lies to him, saying there was no alien visitation. He then examines Grace who has been healed of her bullet wounds. Pepper tells him that Grace's womb was protected from Arden's examinations. She also tells him that she was framed for the murder of her own nephew and the only reason she was locked up is because she looks 'like a freak'. It's clear that Pepper has been given significant intelligence by the beings who laugh at Arden's feeble experiments.

Shachath warns Monsignor Howard about Sr Mary Eunice's possession and how he can prevent her from reading his thoughts using his rosary.

Sr Mary announces a change in the day room and presents a new jukebox. She plays the song 'I Put A Spell On You' to celebrate the arrival of their newest inmate, Judy Martin. Lana tries to talk with Kit but Thredson enters, sitting with them. Thredson reveals the failed abortion to Kit and tells them of his plan to keep them both imprisoned. He's been hired as a full time therapist after Sr Mary found and released him.

Lana is restrained by Carl and other orderlies from attacking Sr Mary who is conducting a room search. She is hauled off to the hydrotherapy room. Sr Mary also searches Judy's room, finding a cucumber. She orders and administers electroshock therapy, adding more voltage against Arden's advice.

Sr Mary later tends to Monsignor Howard's wounds. He surprises her by attempting an exorcism. She retaliates by raping him while he reiterates his vows of celibacy. As she takes his virginity, Arden watches from the doorway, disgusted.

Judy distractedly enters the day room, observed by Lana and Kit. Judy tries to destroy the new jukebox but is stopped by Lana. Judy begins to hallucinate the inmates all doing a choreographed dance to the 'Name Game'.

Arden is feeding the creatures in the afternoon but is interrupted by Sr Mary. She informs him that she wants Judy lobotomised. He refuses, disgusted by her. He then shoots the creatures, stating that the experiment is over. He puts the gun to his head but backs out at the last moment. Sr Mary calls him pitiful and walks away.

Msgr Howard enters the kitchen and dismisses the other patients making bread, except for Judy who he still calls Jude. She notices his crucifixion wounds even through her mental impairment. He admits that he failed in his exorcism attempt and that Jude was right. He tries to get through to her, stirring feelings and memories. Judy responds by advising to kill Sr Mary.

Msgr Howard prays and is discovered by possessed Sr Mary. She offers round two but realises he's trying for the strength to kill her. She wonders about how he will do it which only entices her. She intends to propel towards papacy, appealing to the Monsignor's ambitions for power. He reiterates that he intends to return the nun to her former state of grace. This angers her which results in the loss of control and the demon rising. The Monsignor takes the opportunity to push Sr Mary over the balcony at the top of the staircase. When she hits the bottom, Shachath appears and kisses her. Msgr Howard gives the last rites to Sr Mary Eunice and Arden insists on cremating her himself.

Carl brings Kit for his session with Dr Thredson. On arrival, he sees Grace there with the baby. Thredson is unaware of the alien intervention. He searches for the confession tape but Lana has already hidden it and begins to blackmail him with it.

Judy continues to try and recognise the faces and names of the patients at Briarcliff. She remembers Mother Claudia and begins to babble to her about Mary Eunice and Rome. Judy tells the Mother Superior that Lana has been wrongly imprisoned and doesn't belong in Briarcliff.

In the crematory, Dr Arden strokes Mary Eunice's hair before committing suicide. He climbs onto the tray alongside her dead body and incinerates himself with her.