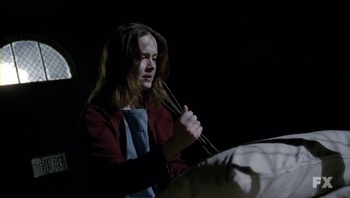 The Monsignor takes an unlikely convert under his wing. Lana secures a new piece of evidence that could exonerate Kit. Arden witnesses a miraculous return.

2012 - Johnny Morgan visits hypnotherapist, Dr Gardner in hopes of curbing his compulsive behaviour. He tells her of his childhood spent killing and skinning cats, a sign of psychopathy. As her discomfort grows, Johnny tells her of his desire to move onto skinning women and recalls his messy attempt at doing that very thing to Teresa. He then reveals his true lineage as the son of Bloody Face. Later on, the next patient arrives to find the doctor dead and Johnny covered in blood.

1964 - Lana is escorted to the office of Sr Mary Eunice and told that she is pregnant. Sr Mary says Lana's claim of rape against Dr Thredson must have been a delusion brought on by concussion.

While Sr Jude lies drugged and restrained in an in-house cell as a trial is held regarding her sanity. Mnsr Howard and the Mother Superior speak of her decline and Sr Mary, Dr Arden and Leigh give false testimonies and frame her for Frank's murder. During the hearing, Leigh impresses both the judge and the Monsignor with his seeming penitence. When Sr Jude wakes up, the monsignor informs her that she's been found guilty of Frank's murder. She will spend the rest of her life as a patient in Briarcliff and will be stripped of her position within the church. Sr Jude will simply be Judy Martin again.

The Monsignor finds Sr Mary packing Judy's things. She reveals that she's aware of his aspirations to be the new pope and that she wishes to follow him to Rome.

Judy is tormented by two former nuns until the Monsignor intervenes with Leigh in tow. He tells the defrocked nun that he forgives her.

Lana visits Kit in the infirmary and expresses her desire to kill Thredson. He reminds her of his need to get Thredson's confession so he can clear his name. Lana goes back to the still tied up Thredson, telling him of her pregnancy and her intention to abort the child herself with a coat hanger. He begs her not to, telling her that he'll change his ways. She gets him to speak of the murders of three women, including her girlfriend Wendy. Kit records their conversation as he hides. After they reveal their plan, Lana tells Thredson that she's already gone through with the abortion.

As Kit hides the tape recording in the hydrotherapy room, Dr Arden enters and asks him to come to his office. There, Arden admits he believes Kit's story about the aliens. He shows Kit a three-toed footprint casting he took whilst investigating Grace's disappearance in the death chute. He states his suspicion that the aliens are targeting the women Kit has impregnated. He plans, with or without his permission, to bring Kit to the brink of death in hopes that the beings will interfere. Willing to do anything in order to see Alma again, Kit agrees.

Carl, a Briarcliff orderly, stops Lana's attempt at stealing a knife from the kitchen. She resigns herself to improvising with the same coat hanger she used on her unborn child and goes to the room Thredson is being held. She discovers that he has escaped. She goes to look for him but finds Sr Mary instead. The possessed nun places her hand on Lana's stomach, revealing that the baby she thought was dead was in fact, still alive. She also tells Lana that her baby is a boy.Lana is smoking in the day room as Judy enters. Having grown to accept her new status as a civilian, Judy sits next to Lana, taking a cigarette and breaking her abstinence. She apologises for her crimes against her and promises Lana that she'll get her out. Lana doesn't quite believe her after having the same promise made to her by Thredson. In a gesture intended to demonstrate her conviction to change, Judy smashes up the 'Dominique' record from the jukebox.

In his lab, Arden injects Kit's heart with potassium chloride, promising to revive him in the two to four minute time scale given. The slowing down of Kit's heart results in the same noises and lights from previous alien visits. Arden follows the light to another room where a now lucid Pepper sits with a naked, alive and very pregnant Grace. Pepper tells Arden that Grace is about to give birth and will need her own room. Meanwhile, the lights and sounds surround Kit's body as Arden is distracted from reviving him.

Monsignor Howard baptises Leigh in the chapel. Leigh thanks him before pushing the priest's head under the water. A janitor later discovers the still alive priest hanging from the chapel's crucifix. Shachath appears and offers release.