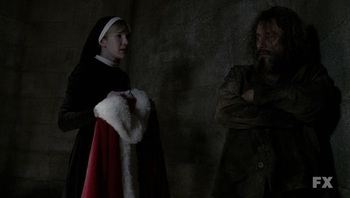 A murderous Santa wreaks havoc on Briarcliff. Sister Jude faces off with the Devil. Arden receives a shock encounter in the death chute.

1962 - A boy tells a bell-ringing Santa Claus that he wants a coonskin cap for Christmas. The Santa packs up for the night and is approached by a man who tells him to not disappoint the boy. When Santa gets short with the man, he is shot. The shooter, dressed in the bloody costume, enters a residence and kills a girl's parents when they cause him to lose his "Christmas spirit".

1963 - The killer is known as Leigh Emerson and becomes a patient at Briarcliff. Sister Jude keeps him shackled, even for a group picture with the others, as she feels he is a danger both inside and outside the asylum. He proves her correct as he bites an orderly's nose and upper lip. Jude locks him in solitary confinement and canes him over the course of his stay.

1964 - Sister Mary Eunice tries to be festive with the patients in the dayroom, but claims Sr. Jude has thrown away all the tree ornaments. Mary tells the patients to be creative as she improvises and decorates the tree with their belongings. In the laboratory, Frank prays over Grace's dead body and tells Dr. Arden they should report the recent events to the police. Arden asks if he wants them to know Frank killed an unarmed woman but Frank does not care.

In the office, Sr. Jude sneaks in and holds a straight razor to Sr. Mary's throat, threatening to end the demon's possession of her. Her telekinesis breaks Jude's hold and Dr. Arden is asked to escort Sr. Jude out of the building. He mentions Frank's intentions to confess and she promises to take care of it. Sr Mary takes a Santa suit to Leigh, intent on lifting his spirits. She recites his criminal history and asks if he wants to be the victor or the victim.

Arden brings Sr Mary a gift; a pair of ruby ear-rings. She giddily takes them even after being told the history of where he got them. He tells her he took them from the faeces of a wealthy Jewish woman, who ingested them daily until she died. Arden hopes the story will disgust Sr Mary but he realises how much she's changed when she learns that she's uncaring. Sr Mary calls him pathetic and that not even God could help him now.

Lana worries that Sr Mary hasn't done anything about her claims regarding Dr Thredson when Kit is returned to the asylum. He's been drugged and dreams of a pregnant Alma who morphs into a pregnant Grace. He apologises to her for getting her killed before Lana wakes him up. She explains to him that she knows Thredson is the killer and that she'll prove Kit's innocence. Kit promises to help but says he is too drugged to be of any use right now.

Sr Jude talks to Mother Claudia about how the country has forgotten the true meaning of Christmas. She thinks the Devil is the culprit and vows to not let Sr Mary be it's next convert. Their meeting is interrupted by the news of Dr Arden wishing to meet with her. Arden admits to her that she is correct about Sr Mary and that he needs her help. He vows loyalty to Sr Jude if she can return Sr Mary's innocence. He later lets Sr Jude into Briarcliff via the kitchen entrance and she tells him she must speak to Sr Mary alone in her office.

Monsignor Howard delivers a pointed hand-crafted star to put on top of the tree in the asylum. He commends Sr Mary for allowing Leigh to have a chance at redemption by unshackling him and dressing him up as Santa. Leigh then tackles Frank, slicing his face with the star and attempts to stab him before orderlies get to him. Arden arrives to tell Sr Mary that she has 'pressing business' in her office.

Lana finds a phone but Thredson stops her as she's dialling. He tells her that he's had to 'kill' Bloody Face and destroy all the evidence. He'd planned on letting her talk to the police as it was the word of a mental patient against that of a psychiatrist. She has, however, betrayed his trust and forced his intimacy. He prepares to strangle Lana with the phone wire but is knocked unconscious by Kit with a fire extinguisher. Lana wishes the doctor dead but Kit says he needs him alive to prove his innocence. They stow Thredson in a closet where Lana promises that she'll be the one to bury him.

Frank puts Leigh in a solitary cell. Sr Mary believes that Frank has had trouble with Leigh and slices his throat with a straight razor. She feigns worrying about a rampage as Leigh cackles maniacally.In the office, Sr Jude prays for guidance and strength. The door opens and Leigh enters. When asked why he's there, he replies that he's there to open his present. Sr Mary locks the door from the outside and Arden declares his loyalty to her. He leaves to take Grace's body down to the death chute where his altered creatures can take care of her. Along the way, he is blinded by a bright light, deafened by sirens and sees fractured images of a strange being. He regains his senses to find the cart is empty and Grace's body is gone. He hasn't yet reached the exit.Back in the office, Leigh reminds Sr Jude of her cruelty. He intends to rape her but Sr Jude stabs him in the neck with a letter opener, killing him.