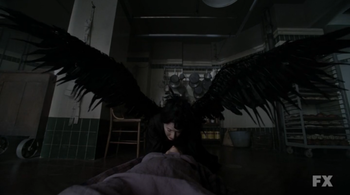 Sister Mary Eunice is terrified to discover a dark angel has descended on Briarcliff. Kit makes a bold move to be reunited with Grace.

A pair of nuns arrive in the infirmary to attend to Grace. One finds that Grace is suffering from an intense fever and upon removing the blankets, discovers Grace is haemorrhaging vaginally. They decide not to call on Arden after hearing rumours that he was the one who performed Grace's botched surgery. They try to revive Grace from fatal blood loss as she is visited by a veiled angel dressed in black. She is named Shachath and is the Angel of Death. Grace tells her that she's ready and the angel spreads black, feathered wings. Grace is resuscitated just as the angel is about to give her the kiss of death and fades away. Grace tells the nuns that they should have let her die.

Sr Mary Eunice enters Arden's study as he is testing on plants. She tells him about Grace's near-death experience and blames him for her condition. He denies any involvement and says that he performed no such surgery on her. He accuses Sr Mary of being disrespectful of his authority and slaps her. Sr Mary warns him not to touch her again. He raises his hand and she telekinetically throws him across the room.

A nun is in the kitchen, slicing bread. Behind her sits Miles, an alcoholic who is suffering auditory hallucinations. The voices in his head taunt him continuously. He cries out for them to shut up and the nun stops, scolding him. His hallucinations continue and he mentions to the nun that his meat isn't cut correctly and there must be something wrong with the slicer. He offers to look at the machine and the nun backs off, allowing him to take a look. He rolls up his sleeves and proceeds to slice his own wrist against the blade. Sr Mary Eunice enters and sees a strange word written on the wall in Miles' blood. She informs the guards that it's a name in ancient Aramaic. She asks Miles if he knows the name and if he summoned 'her'. He says he doesn't know and is taken off to a cell.In the cell, the guards tell Miles not to touch his stitches. They leave and the lights go out in the asylum. Shachath appears in the room and he begs to be let go. He undoes one of the bandages and picks out the stitches, allowing blood to pour from his arm. The angel kisses him and allows him to die. She's aware of another presence in the room. It turns out to be Sr Mary Eunice, who tells the angel that she's a 'simple nun'. The angel knows there's something darker about her and says she is like her but 'fallen'. Shachath speaks to Sr Mary's human side who's been possessed and screams for her to save her. The demon tells her to shut up and that they like it here. The angel leaves.

Arden examines Grace and tells her of the accusations against him. He tells her that he's going to take care of her, if only to 'set the records straight' and injects her with an unknown medicine.

In the playroom, Thredson rapes Lana. She looks to the corner of the room and sees Shachath standing in the shadows.

Kit meets with his lawyer, who tells him even with his testimony from Grace, he thinks it's unlikely many people would believe another patient from Briarcliff. He tells him that Dr Thredson set him up but there's nothing he can do. A change comes over Kit as his lawyer speaks to him. He looks towards the window and then the objects on the desk. He picks up the hole-punch and proceeds to beat the lawyer with it.

Shachath visits Lana after Thredson leaves. She offers Lana the kiss and she nearly submits to temptation. She changes her mind so the angel leaves before Thredson comes back to the basement. He tells Lana that he's sorry for what he's done and that bad things have happened between them that he didn't understand. Lana looks hopeful until he offers to either kill her by cutting her throat or strangling her. He then says that it doesn't matter how he kills her and takes out a syringe. He says Lana will get to see Wendy again. Lana fights against him by shattering a framed photo of Wendy over his head and overpowers him. She injects him with the syringe and he's momentarily knocked out. She grabs the keys from his belt and unlocks her restraints. As she runs up the stairs, Thredson tries to grab her but she manages to push him back, causing him to fall onto a table.Once outside, Lana runs into the street. A car approaches her and Lana jumps in, telling the drive to get away quickly. The driver asks Lana why she's running away and that she's being unfair to her boyfriend. She quickly realises she's in the car with another man who doesn't favour women. He tells her he caught his wife cheating on him. With that, he brings out a gun. Lana sees Shachath appear in the backseat and pleads that she doesn't want to die, not after everything. The driver shoots himself in the head. Lana tries to gain control of the car but it crashes.

Lana wakes up back in Briarcliff, wearing a head brace. Sr Mary Eunice stands over her. She informs her that the driver died in the accident and that Lana sustained some injuries.

In his hotel room, Sr Jude is tending to a dying Sam. She attempts to call the police and notices a bottle of bourbon on the table. Shachath comes to kiss the detective as Sr Jude turns on the tv. There's a newspaper clipping relating to a 'girl in a blue dress' and the word 'murderer' written in blood underneath.

1949 - A hungover Judy wakes up in a trashed hotel room to Terry, knocking on the door. He informs her that she's been replaced as the singer in their band as she missed last night's performance. She attempts to seduce him to change his mind but he rejects her advances. As he leaves, he tells Judy that the police are coming to interview her about a hit-and-run incident from a few days previous. Judy panics and packs her things. She leaves and begins driving, drinking on the way. She crashes her car and wakes before a statue of an angel. A nun approaches her and asks her if she's hurt.

1964 - The phone rings in Sam's hotel room. It's Sr Mary Eunice who claims to be Sr Jude's 'conscience'. She begins taunting Sr Jude, telling her that she killed Sam and the police are on their way. She tells her that she should run and never return to Briarcliff. Sr Mary informs Sr Jude that she's left her a bottle of bourbon and a straight razor.

In a diner, Sr Jude goes to use the restroom. She stands in front of a mirror, takes out the razor and cuts her wrist. She's seen lying in a pool of her own blood. However, this was her imagination and she leaves, sitting in front of Shachath.Sr Jude asks the angel why she's still alive, despite prior suicide attempts. The angel tells her that she doesn't judge but that Jude's 'song' was different. Jude had once tried to kill herself after her fiancée left her the night before their wedding. She had told him that he'd given her syphilis and that she was then unable to have children. Shachath tells Jude that God has other plans for her and that it wasn't time for her to die. Jude admits her failure before God, saying that she's a whore and a murderer. A pair of waitresses see Jude talking to herself and go to call Briarcliff.

Jude visits the family of the 'girl in the blue coat'. As they discuss the little girl and Jude is about to confess, a young woman in a nurses uniform arrives at the house. It turns out to be a grown up Missy, the girl Jude thought she'd killed. Apparently, she was returned to her family suffering a few broken bones. Jude reacts in a confused state, saying she'd prayed for Missy's soul ever since the accident. She recalls that it happened around the same time she'd become a nun and that it had inspired her to take her vows. Missy's mother tells Jude that her husband, Hank had vowed to avenge what happened but had decided that whoever was responsible were suffering alone anyway.

A nun tries to give Lana her medication but she refuses, asking to speak to Sr Jude. Sr Mary Eunice enters and Lana informs her of what has happened. She offers the truth that Kit is innocent and Thredson is the real Bloody Face. Mary Eunice recalls the night of the exorcism and remembers the 'Devil' saying to Thredson that it loved his work. Lana begs Sr Mary to call the police. Sr Mary tells her that she believes her and that for now, she is safe.

Sr Mary Eunice leaves Lana and converses with the security guard, Frank. She informs him that Lana is very confused and has claimed that Dr Thredson is the real Bloody Face and Kit is innocent. Frank tells Sr Mary that Kit has escaped custody and is now on the run. The police have ordered that if he's apprehended, one should 'shoot on sight'.

Kit is seen in the Death Chute, having returned to Briarcliff by way of secret exit close to the woods. One of the mutants has trailed behind Kit and followed him. A healthier Grace is in the kitchen. She tells a nun who's wondering why she's not in bed, that she's 'Dr Arden's little miracle'. The nun requests Grace go back to her room but she begs to stay. The nun agrees and leaves the room. Kit appears behind Grace and the two hug. He tells her that he's going to take her away but as they leave, the nun returns and cried for help. As she does, the mutant creature attacks her and rips out her throat. It throws her body away and goes for Kit. He pulls the hooked attatchment from a dough mixer and disembowels the monster. It lets out a scream and dies. Frank enters and pulls a gun on Kit. Kit is unable to explain the situation and Frank shoots. Grace jumps in front of the bullet which hits her chest. Kit is taken away as Grace lies on the floor, dying. Shachath appears before her and kisses her. Grace smiles, saying 'I'm free' and dies.