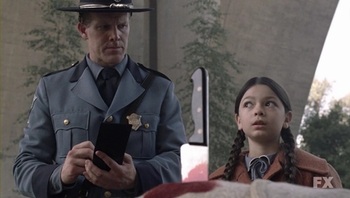 The Origins of Monstrosity

A strange little girl is abandoned at the asylum. The Monsignor makes a bargain with Arden.

2012 - A 911 caller tells the operator to send police to Briarcliff. He implies that he's the real Bloody Face and that those killed were imposters. The police arrive to find the three copy cat killers strung by cables to the ceiling and stair rails.

1964 - The mother of Jenny Reynolds brings her to Briarcliff and tells Sr Jude that she believes her little girl killed one of her friends whilst playing the woods; stabbing her with scissors. Jenny denies it, insisting it was a bearded man in a brown jacket.

Lana wakes up in Thredson's playroom, where she's been placed on the bed and surrounded by things from her own home. At first, she doesn't realise she's not at home but Thredson's voice startles her. He's cooking for her and describes it as the 'perfect mommy snack'. He explains that he grew up in the system, untouched and unloved, abandoned by his own mother. Lana compliments the food and expresses appreciation for his kindness. She tells him that she felt abandoned at Briarcliff and that she can sympathise with him. He says that he was right about her and that she's 'the one'.Thredson tells her of his time in medical school and his epiphany upon seeing his mother's cadaver. He knew it wasn't really her but he used the cadaver as a surrogate though he was dismayed by the chemical smells and her cold skin. He says he needed a more lively subject and went on to skin a live woman. When Lana recoils, Thredson comforts her and says that she's his 'new mommy' now.

Sam Goodman, a Nazi hunter hired by Sr Jude to investigate into Arden, calls her to say that the prostitute Arden attacked was right. He will however need a fingerprint to prove it. Sr Jude ends the call and looks up to see Jenny, who explains that she was left behind by her mother.

Msgr Howard is called to perform the last rites on a tuberculosis patient. When he arrives, he recognises the victim as Shelley covered in body and facial lesions.

1962 - Father Howard tours the church's new acquistion, Briarcliff Tuberculosis Centre. He meets its supervising physician, Arden. As they wheel out a nurse afflicted by the disease, Arden explains that he is testing for a new immunity booster and makes an agreement with the priest over testing on live subjects.

1964 - Msgr Howard strangles Shelley with a rosary to protect himself and Arden and, upon returning to the asylum, confronts him about his monstrous abuse of her. Arden argues that his test subjects are the next stage in human evolution. He then reveals his next subject, Spivey who he says can now survive a nuclear attack. The priest is disgusted and threatens to expose Arden and his work. Arden says that that will also expose Briarcliff's other dark secret causing the priest to pause.

Sr Mary Eunice is cutting herbs in the kitchen. Jenny, the little girl watches her and tells her that she did kill her friend but that she deserved it. We see a young Mary Eunice Mc Kee at a pool party. She's pranked into being naked in public and is humiliated. She explains that all she wanted was to be liked by people and that she was always the victim. Present day Mary offers to foster Jenny, who says she has an 'authentic impulse'. She tells her some secrets about Sr Jude and teaches Jenny to 'defend herself'.

The Monsignor enters Sr Jude's office and tells her that she's been moved to a home for wayward girls in Pittsburgh. She blames Arden for orchestrating the situation, despite the Monsignor's insistence otherwise. He tells her to pack her things.

Sr Mary Eunice enters to see Sr Jude packing her things. The elder nun explains the situation and asks Sr Mary to get the cognac. Sr Mary eyes up the red lingerie.

Kit calls Thredson from the asylum using his one phone call. Kit accuses Thredson of manipulating him into confessing, something Thredson retorts by saying that he needs to live with his responsibilities. Thredson seems angry that Kit would lie about 'little green men'. While they speak, Lana tries to file down her chains to try to escape. Thredson is enraged at being called a liar and a bastard. He comes back to the playroom to see Lana trying to escape. He hits her and restrains her wrists again. He then says he's got to kill her for trying to abandon him. He gets the Bloody Face mask and a scalpel, remarking that people never live up to his expectations.

Sr Jude pours Arden a drink, celebrating his victory. He won't drink the toast alone so they both do, him more than her.

Sr Mary arrives at Sam's hotel room. He asks her if Sr Jude sent her and she replies that she doesn't know she's there. Sr Jude later arrives with a fingerprinted glass but finds Sam with his throat slashed. He manages to tell that it was the younger nun who did it.

Sr Mary comes back to Arden with Sam's file on him. She's hidden parts of it as insurance in case he betrays her. He rages about having to hide his solitary life and asks her why she's helping him. She says that it's the beginning of a new era and he should trust her with his soul.

Little Jenny kills her family, taking some of their hair as twisted trophies. She tells the police again that it was the bearded man with the brown jacket.

Thredson admits to Lana that he was aware of her before her commitment. In a flashback, we see him observing Lana telling a crime reporter that she wishes to write about Kit's monstrosity. Back in the present, Thredson is about to cut into her before Lana says that it's okay. She says that a mother's love is unconditional. He realises his mistake and removes the mask. He asks to nurse from her as she sobs.

2012 - The police investigate Briarcliff and trace the car back to Leo. They identify his body and arm but Teresa is still missing. The phone rings (still held by Leo's dismembered arm) and the voice on the other end tells them that he only killed the imposters. We then see Teresa strapped to his play table.