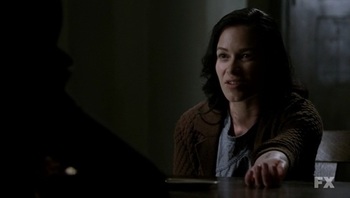 A new patient claiming to be Anne Frank exposes Arden's past. Kit learns why Grace was admitted to Briarcliff.

Frank, a guard at Briarcliff escorts Sr Jude to the cell of an unidentified woman, who was bought there after being arrested for assault. Sr Jude learns that the newcomer was enraged by an off hand anti-Semitic remark. The woman begins whistling, defiantly upon further questioning.

Dr Arden continues his experiments on the mutilated Shelley, injecting her with something he says may make her live forever.

Grace and Kit discuss Kit's latest visit with Dr Arden, who is desperately searching for the missing micro-bot. Kit urges Grace to share her story as to why she's locked up in Briarcliff. She explains that one night, she woke to an intruder in the house in the middle of the night. He had cut her stepmother and father up with an axe. She found the dismembered body parts in a closet she was hiding in. Her stepsister blamed the murders on Grace.

Lana is questioned by Thredson about her whereabouts during the movie since he knows that herself, Grace and Kit tried to escape. She recalls Kit's warning not to tell anyone about the dead inmate. Thredson thinks Lana shouldn't be with the rest of the patients and offers her treatment for her homosexuality. She declines, saying there is no cure.

In the common room, the woman is writing a note to someone named Kitty, regarding her stay. Lana warns her to hide the pen or risk solitary. Arden enters and the woman recognises him as a doctor from Auschwitz. She attacks Arden and is hauled away, screaming that her name is Anne Frank.

Sr Jude questions the woman's claims. Anne says that her saviour was an American soldier, who widowed her during redeployment in the Korean War. She concealed her identity to inspire others as a martyr.

Thredson reveals that he thinks Kit is neither guilty or insane. He's willing to lie to save him under one condition; that he stops deluding himself of the trauma induced abduction fantasy. Thredson believes that Kit murdered a librarian and a secretary. On the night of Billy's confrontation at the garage, Kit killed Alma out of frustration and societal guilt and made up the abduction story to cover it up.

Anne reveals that Arden is Hans Gruper, an SS doctor who seemed gentle in Auschwitz; bribing women and children with sweets. With a coin toss, he would 'save' women who would come back very sick if at all.

In the med line, Lana fantasises about being rewarded by Columbia University for her six-part expose on the atrocities at the asylum. She credits her inmates as her inspiration and says she did what she had to to get out. She consents to Thredson's aversion therapy.

Kit begins to wonder whether he did make up the abduction experience. Grace convinces him of his sanity and says that she doesn't care if he is a killer. They have sex on the kitchen counter but are caught by a guard.

Sr Mary Eunice impresses Sr Jude after choosing a cane to punish with. Grace wants to get the caning over with but Sr Jude intends to sterilise them both instead. The two are separated and Sr Mary leaves Grace's file open for Kit to read.

Sr Jude relates the mounting evidence against Arden to Msgr Howard. He dismisses her vendetta against Arden and her belief of Anne's story. He also says that he knows she's been drinking and urges her to pray. In Arden's lab, Howard calls and informs Arden that people are on to him and that he should get his affairs in order.

Sr Jude tells her Mother Superior that she's fallen off the wagon and begun drinking again. She also relates that she thinks Arden is a war criminal. The Mother Superior suggest Sr Jude go above the Monsignor's head but Sr Jude rejects the idea.

Sr Mary Eunice and a guard lead Kit to a cell across from Grace. They haven't castrated him yet. Kit confronts her about her file. Grace admits that she was molested by her father so she killed him. She killed her mother for trying to keep Grace quiet about the situation.

Lana is visited by Thredson in the day room. He apologises for using the controversial therapy and lets her see a photo of Wendy. He promises to leave with her at the end of the week.

Kit asks for a confession with Sr Jude. He says that as God knows all, He will know if Kit killed Alma. Kit himself doesn't know and will confess any and everything he's done.

Anne is trapped with Arden in his lab. Anne pulls a gun she secretly stole from the police and shoots Arden in the leg. He throws her the key to get out. Anne finds a completely disfigured Shelley on the other side of the door, begging her to kill her.

1964Sister Jude, in civilian garb, meets Sam Goodman, a Nazi hunter and Holocaust survivor, at Mother Claudia's recommendation. She gives him Arden's personnel file as he explains how false records can be made. He urges her to stay away from Arden, lest he grow suspicious.

Anne is still holding Arden at gunpoint when Sister Mary Eunice and Frank intervene. She is sedated. As she comes to, she is questioned by Sr. Jude, who explains that Arden was rushed to the hospital and that she and Frank searched Arden's lab, but did not find the legless creature that Anne claimed to have seen there.

Anne's husband arrives at Briarcliff and informs Sr. Jude that her real name is Charlotte Cohen Brown. He explains that his wife is "high-strung" and obsessed with Anne Frank after seeing a play about her life. After the birth of her son David, she tattooed her own arm and made a wall of Nazi-related memorabilia in the den. Dr. Thredson appears and casually diagnoses Anne with postpartum psychosis. Sr. Jude allows her to be released to her husband, but the woman claims not to know him and insists that she is Anne Frank, but a family photo snaps her to reality. Dr. Thredson believes Sr. Jude is making a mistake by releasing the woman, and further berates her for authorizing sterilization of Kit and Grace.

Grace and Kit speak through the wall separating their cell, vividly imagining that they are together. Sr. Mary Eunice releases Kit from solitary in time for dinner, saying Sr. Jude changed her mind about his procedure. Grace thinks she is similarly reprieved, but the nun tells her she will still be going under the knife in the morning. After loudly protesting until she becomes tired, Grace is awoken by the loud rattling of her cell door. A bright and unearthly light shines into Grace's cell under the door, reflecting in her eye.

It's medication time in the day room. Lana is interrupted by Dr. Thredson, who tells her that they will be leaving together after dinner and to meet him at the staircase. He visits Kit, and sets up a reel to reel recorder to record and play back Kit's recollections, effectively confessing to the murder of his wife.

In "the light", Grace encounters a naked and pregnant Alma before she is probed by an extraterrestrial.

Arden is upset about the snooping in his lab while he was at the hospital, and that Sr. Jude sent Charlotte home after injuring him. He wants the nun to beg for forgiveness. When she refuses, he says he will demand that Mnsgr. Howard fire her. He leaves to dress his wound and Sr. Mary Eunice offers her assistance. She explains that she has removed Shelley from the lab. Sr. Mary Eunice hints that Arden's position of authority in the asylum in the absence of Sr. Jude would require a "strong right hand".

In a schoolyard nearby, a small girl runs screaming from "a monster" she sees in a stairwell: Shelley, having somehow made a long crawl from the woods.

Charlotte's husband returns her to the asylum, fearing to leave her alone with their son. He apologizes to Arden for her shooting him, but wants Dr. Thredson to treat her. Sr. Jude says that he is welcome to try to consult with him, and sends Frank to find the doctor, who escapes successfully with Lana. He tells Frank to relay that he doesn't actually work there, and never did.

Frank informs Sr. Jude that Lana is missing, off grounds. She laments her role, and that she must leave it. She takes off her habit in her room, and goes to a bar in civilian garb, there being offered a drink by a nearby drinker.

Dr. Thredson takes Lana to his home, saying they will see the police in the morning. She tries to phone her friend Lois, but Dr. Thredson stops her. Sharing a glass of wine with her, he anticipates she will win a Pulitzer - for telling his story. She doesn't realize immediately what that means, but after she catches on that his home is subtly decorated with human body parts. An exploration of his home uncovers his "furniture making" workshop, where he processes human skin and bones. He catches her snooping and drops her through a trapdoor.

In the day room, Kit notices Grace bleeding vaginally. He tries to get help, but is interrupted by the police who are armed with Kit's taped murder confession. Grace, startled out of her trance-like state by the arrest, screams to Kit that he is not insane and that she has seen his wife Alma.

Lana wakes up, chained to the floor in Dr. Thredson's hidden workshop. She is horrified to discover Wendy's corpse, thawing on the floor beside her. Dr. Thredson appears and says that Lana is to continue "therapy" with him by kissing Wendy's cold lips. He explains that he has removed the teeth, allegedly so as to soften the experience, and dons a mask that displays them. The mask clearly displays his long-hidden secret identity: he is the original Bloody Face, and must likely responsible for the murders Kit is accused of.

Sr. Jude awakens in the bed of he man who had bought her a drink the night before, and dresses carefully making sure not to wake him.

Charlotte, now an adoring pliant housewife and doting mother, seems happier than ever. Though she has begun to pack away her wall of Holocaust photographs and articles, one picture still hanging there reveals a familiarly sinister face amongst the officers surrounding Hitler; a young Arthur Arden, a.k.a. Hans Gruper.