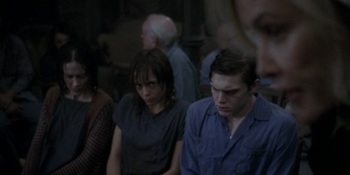 A violent storm hits Briarcliff Manor, giving a group of patients an opportunity to try and escape. Sister Jude continues to be haunted by her past.

2012 - Bloody Face invades the cell that Teresa is cowering in. Leo, previously thought to be dead, rallies to attack him and manages to wrestle the knife away and stab Bloody Face in the chest. Teresa stabs him a few extra times to make sure the job is done properly. The couple make their escape when they encounter a second Bloody Face, closely followed by a third. They're promptly shot in the head. The two killers unmask themselves and are brothers called Devon and Cooper. Their friend, Joey was the first Bloody Face the newly-weds killed. They begin wondering who or what ripped off Leo's arm before they see a fourth Bloody Face emerge.

1964 - Sr Mary Eunice brings the mail to Sr Jude, including a newspaper dated 1949 with a front page article about missing Framingham resident, Missy Stone. The photograph shows the girl is the same one that Sr Jude killed in a hit-and-run accident. Completely distraught and paranoid, Sr Jude goes to the bakery to knead bread. Dr Thredson enters and asks her about Jed's autopsy. Sr Jude snaps and accuses him of planting the newspaper and gives him two weeks notice to clear out his office.

Dr Arden tries to examine the chip from Kit's neck which begins to reassemble itself.

Sr Mary Eunice informs the patients of the upcoming storm and plans to comfort them by showing them the film, 'The Sign of the Cross'. Sr Mary seems to mock Sr Jude with communion wine and lipstick which she attributes to Dr Arden. One of the patients known as The Mexican, recognises the change in Sr Mary. She prays in her cell when Sr Mary enters and stabs her with scissors. She wheels her out to the woods and dumps her, leaving her as food for the creatures.

Sr Mary meets with Arden and discusses the creatures, saying that they're getting hungrier. She taunts him, knowing of his desire for her and makes vulgar advances towards him. This dampens his interest and he throws her out of the room.

Lana solicits Dr Thredson into passing a message on to Wendy. Thredson relishes the chance to go over Sr Jude's authority.

Grace and Shelley discuss another escape plan. Shelley reveals she wants to move to Paris as she believes they are more sexually free and tolerant.

Arden cleans his office and prepares to stay there overnight to ride out the storm. Sr Jude enters and confronts him about the forbidden lipstick. Arden admits to admiring Sr Mary's purity and innocence but believes she's been corrupted by patients like Shelley. Sr Jude disagrees, asserting that Arden is planning to usurp her. He suggests that she take a leave of absence. She leaves to her office when her phone rings. Her hit-and-run victim speaks to her from beyond the grave. Sr Jude apologises, breaking down as she sees the girl's glasses on the desk. She breaks her sobriety by sampling the communion wine before leaving to start the film for the patients. An orderly reports that The Mexican is missing from her cell. Sr Jude tries to calm the residents of the asylum as the storm rages outside but she's clearly shaken from the phone call. She then leaves to find the missing patient.

Thredson tells Lana that he inquired after Wendy, finding her house door was open and Wendy was absent. He expresses concern that Wendy's disappearance has something to do with Bloody Face even after the insistence by the police that they have the right man. Grace and Shelley, along with Kit, take the storm as an opportunity to try another escape. Lana attempts to follow but after her first betrayal, she must convince Grace and the others to let her join. Shelley sacrifices herself to distract a patrolling orderly, asking if she can't join them that Lana will blow the lid on the asylum. Sr Jude catches a glimpse of the others and pursues.

Arden listens to the weather report as he puts lipstick on a statue of the Virgin Mary. He shouts 'Whore!' at the statue before pushing it over.

Shelley knocks the orderly out before running off to catch up with the others but unfortunately, she runs into Dr Arden. Meanwhile, Sr Jude's pursuit finds her face to face with one of Kit's alien acquaintances.

The escapees can't wait any longer and leave Shelley behind. They exit into the storm as Thredson notices their absence. Sr Mary is oblivious as she's so engrossed in the film, waiting for the Christians to be eaten.

Arden takes Shelley into his office and attempts to rape her. He's unsuccessful and she laughs at the size of his penis. Arden smashes her over the head with a blunt object.

The escapees find The Mexican being eaten by the creatures in the woods and are pursued by them back to the tunnel.

Sr Mary Eunice wakes Sr Jude from her drunken stupor and informs her of the patients escape. Sr Jude puts an early end to the film and any future privileges due to the escapees. Sr Jude mistakenly believes them to be Pepper, The Mexican and Shelley. The real escapees have managed to return to their seats albeit with muddy shoes.

Shelley awakens on Dr Arden's medical table, strapped down. She learns that everyone believes she escaped and that the doctor has amputated her legs just above the knees.