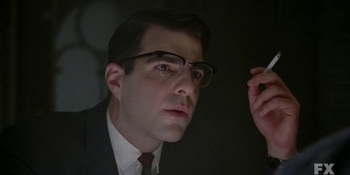 An exorcist is summoned to Briarcliff to help save a troubled farm boy. Sister Jude's darkest secret is revealed.

2012 - The episode begins where the last one left off. Bloody Face chases Teresa down the tunnel. He chases her into the main hall where she tries to save Leo. She ends up in the room where Leo's dismembered arm is. She screams as Bloody Face repeatedly stabs Leo to death. Bloody Face begins banging on the door as the episode switches to 1964.

1964 - Wendy is crying to her friends over the previous night and Sr Jude's blackmail. She goes to take a shower and mistakenly leaves the window open. Bloody Face enters the house and presumably kills her.At the asylum, Sr Jude is doing room checks. A list of grievances is taken from Lana's room. Sr Jude wants to erase Lana's memory and has Dr Arden perform electric shock therapy on her.Dr Thredson arrives and speaks to Kit. Kit insists that he's not crazy and that Alma was abducted by aliens, just like himself. Thredson diagnoses Kit as manipulative with acute clinical insanity.In the woods, Arden and Sr Mary go to feed the creatures and Sr Mary asks what they are. Arden declines to tell her, saying he will in good time. Instead he offers her a candy apple which she reluctantly takes a bite of.Lana has brief memories of the painful electric shock therapy but she does still remember everything from before the session. Lana overhears Kit and Grace discussing an escape plan in the common room.Thredson has a talk with Sr Jude about Briarcliff's treatments and how he feels they're barbaric. Sr Jude has a chat with a concerned family which Thredson then interrupts. The family discuss their son, Jed had begun hearing voices and seeing things that weren't there. He also ate the heart of one of the animals on their farm. They express concern that their son is possessed by a demon. They go to see Jed in his room to find his body twisted completely. He cries that he is scared before speaking a horrific demonic language.

At the asylum, Lana tells Grace of the tunnel she found when entering the asylum. She says they can use it to escape but she must not tell Kit. The Monsignor and a visiting priest, Father Malachi, perform an exorcism on Jed in the presence of Dr Thredson and Sr Jude. The lights flicker as the exorcism goes on. Items fly around the room as possessed Jed begins confronting Sr Jude about her promiscuous past and her manslaughter crime. He mocks her, shouting; 'You're a murderer, Judy!' causing her to snap and attack him. The Monsignor intervenes and drags Sr Jude out of the room.

In the mayhem caused by the demon's rage, the cell blocks open and Lana takes the opportunity to escape with Grace. Kit catches them and after Lana refuses his company, causing himself and Grace to run off together. Lana panics and screams to the guards that Kit is trying to escape. Kit and Grace are captured. Lana looks on, feeling guilty that Grace was caught too.

Possessed Jed's rage continues and Thredson administers a sedative. It has no effect and Jed goes into cardiac arrest. Thredson attempts CPR but pronounces Jed has died. There is a final flickering light as Sr Mary Eunice faints, an unseen force apparently knocking her back.

Arden, having heard of Sr Mary's fainting, goes to check up on her. She is asleep in bed, wearing just a night shirt. Clearly tempted by her lack of clothing, Arden attempts to cover Sr Mary's modesty by adjusting her night gown; causing her to wake up. He expresses his concern for her well-being but still catches a glimpse of her breasts through her shirt. He turns away, saying that it's dismaying seeing her out of her costume. Sr Mary pulls the sheets up to her chin and apologises, saying that she's comfortable around him. As he leaves the room, Sr Mary forcefully throws the blankets off. A crucifix on the wall begins to shake.

Sr Jude praises Lana for sacrificing her own freedom to stop Kit. She tells her that her reward is getting to punish the escapees. Grace and Kit are marched into the room and Lana is instructed to pick the cane she wishes Sr Jude to use. Before Sr Jude can proceed, Kit instructs Grace to stand up and let him take the blame. Sr Jude accepts this but doubles Kit's punishment to 40 lashes.