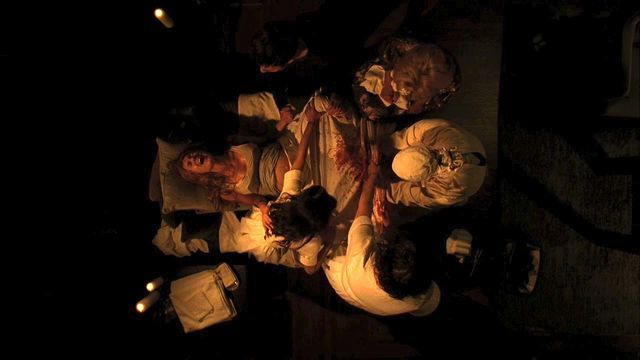 Vivien gives birth. Violet and Tate attempt to rid the house of its ghosts for good.

1984 - One year after Constance killed the father of her children, she's still living in the house. She has succumbed to alcoholism and depression, drinking until midday and passing out on the couch. She is having financial problems and the bills are piling up. A seven year old Tate is mostly left to his own devices. In the hallway where he's playing, the basement door opens on its own. Tate's not scared but intrigued and rolls his toy car down to the basement. He goes to get it, the monster in there attacks him. Nora stops it and soothes Tate, drying his tears and cuddling him. Tate says to Nora that he wishes she were his mommy. Nora teaches Tate the same thing he will teach Violet years later: To make a ghost disappear, you simply say 'Go Away' forcefully.

2011 - In the present day, Nora and Tate are in the basement again. At first, Nora doesn't recognise who Tate is. When he tells her of the baby, she remembers him. Tate tells Nora that everything's changed as he's fallen in love with Violet and that he can't take Violet's brother away. Nora says that she will.

Ben tries to get Violet in the car so they can pick Vivien up and drive to Florida to visit Vivien's sister, Jo. Ben either doesn't mention or doesn't remember that Tate is the Rubber Man, who raped his wife and attacked and drugged him. He does however state that he doesn't trust neither Violet nor Tate. Violet lies to Ben, saying she hasn't seen Tate in weeks. She tells Ben that she can't go to Florida, that she'll be physically sick. He manages to persuade her to get in the car. Violet lies down in the backseat but as soon as the car leaves the grounds, Violet disappears and reappears in the bedroom of the house. Ben doesn't notice.

Tate and Violet discuss how to hide her death from her parents for a while longer. She says that she's scared her parents will go permanently insane if they find out. She's worried about their future as Chad and Patrick are terrible example to follow and she's sad that she won't be able to have children.

Chad and Patrick are decorating a nursery for the child they plan to take from Vivien. Tate and Violet enter with Violet offensively asking who allowed them to decorate the nursery. Chad states that the house is theirs also and that they're having twins. Violet sarcastically questions if one of the nurses in the basement is a surrogate mother. Chad replies that it's Violet's own mother. She says that it doesn't matter as they're leaving the house. Chad tells her that they won't as she is stuck there.

Violet tells Constance what the ghosts are planning. Constance speaks to Chad, initially going into a full blown homophobic rant. Chad keeps his cool, citing academic studies that show children raised by same sex couples don't develop any differently than those of straight ones. He also questions Constance's own track record as a mother. In the end, Constance tells Chad that they can have one of the Harmon's twins as long as it's not her own grandson. Chad refuses, saying he wants both and plans to smother them so they can stay cute forever.

Violet talks to Billie Dean about getting rid of Chad and Patrick for good. Billie Dean says to Violet and Constance that she knows of one very successful exorcism performed in 1590: The Roanoke Colony in present day North Carolina. Billie Dean says that all the settlers died and haunted the local Native Americans (the Croatoan tribe). One of the elders used property that the English settlers left behind and burned them. He then said the name of their tribe, 'Croatoan' as a spell against them. This worked according to Billie Dean.Billie Dean recognises Violet is already dead and speaks to her telepathically. She tells Violet that she's sorry she died so young. In response, Violet telepathically pleads with her not to tell Constance of her death.Billie Dean talks about the great evils that feed the house. Tate appears behind her though Billie Dean senses his presence immediately. Tate says that he wants to help but Billie Dean looks visibly shaken and tells him that he shouldn't be here. When Violet asks Billie Dean about her reaction, Constance replies that it's hard for mediums to be in the presence of a dead person. Violet knows this to be untrue as Billie Dean has no problem being around her.

The doctor at the hospital recommends that Vivien take lots of bed rest instead of going to Florida. Because one of the twins is growing at a rapid rate, it's better for Vivien to have an emergency C-section which she doesn't plan on telling Ben. The doctor decides to tell Ben instead. Vivien is only six months pregnant but one of the twins (Tate's baby) is taking all the nutrition from the other baby (Ben's) and is slowly killing it. Tate's baby is growing supernaturally fast.

After learning the ritual, Violet returns to her room where Tate is upset at the things Billie Dean said about him. Violet needs a talisman from Chad and Patrick to be able to do the ritual properly. Tate believes Billie Dean's ritual is bullshit and won't work. He nonetheless goes to see Patrick and tries to seduce him. Patrick beats him up but Tate manages to steal his ring. Patrick screams at Tate for murdering him and trapping him in a house with someone he doesn't love. Chad overhears this and whilst distracted, Violet steals his Rolex watch.

Ben and Vivien arrive back at the house. Vivien remains terrified of the house and wishes to stay in the car and wait for Ben and Violet. Ben believes that Violet jumped out the car at a red light, just like Luke believed Hayden did. Violet tries to tell her dad that she's dead and the spirits of the people who die in the house remain there. He doesn't believe her and asks if she's been taking drugs.Vivien goes into labour in the car. Constance takes her to the living room where the ghosts of Charles Montgomery and the nurses are there to assist her. Ben tries to call an ambulance but his phone suddenly has no signal and the land line is disconnected. Troy and Bryan, the red head twin ghosts, smash up Ben's car making it unusable. The electricity then goes out in the house.Charles has to do the delivery as Ben and Vivien are unable to leave. The delivery is illuminated by candles and Vivien is given ether to help with the pain. The first baby, the one Ben's fathered, is stillborn. Charles gives the baby to Nora so she can have the baby (it died in the house). The second child that Tate fathered is alive and healthy. Both Ben and Vivien question why the people who assisted the birth are covered in grisly wounds. Constance evades their question. During the birth, Ben is going insane. Charles and the nurses terrify him and he keeps thinking of Hayden.

Violet sees her mother going into labour and immediately goes to the basement, realising she needs to hurry with the exorcism for Chad and Patrick. She burns Chad's watch and Patrick's jewellery. Chad appears and Violet begins saying 'Croatoan' over and over. Nothing happens and Billie Dean was wrong. Chad laughs, bemused at Violet's attempts to banish him and tells her that nothing will work to banish anyone. He then burns the crib Patrick built. Violet asks why he did that and he replies that he found out that Patrick doesn't love him and that he doesn't want to start a family in a loveless relationship. He says that while spending eternity with someone who doesn't love you is bad, there are worse things: 'Tate actually love you but he's a monster and will remain a monster. He killed me and Patrick and raped your mother.'

Vivien is dying after giving birth to Tate's baby. Ben begs her not to leave him. Violet stands on the other side of the bed, pleading the opposite; to join her in death.

Constance takes the baby to the kitchen to clean him off. Here she meets Moira, crying tears of joy. Hayden enters and says the baby is hers.

Violet confronts Tate. He says that Violet changed him. Violet confronts him about the Westfield Massacre but Tate doesn't seem to remember it at all. He starts crying and asking why he would do that over and over but does seem to remember the police shooting him. Violet asks him why he raped her mother. He seemingly has no answer other than stating he was a different person then. Violet knows that Tate made Vivien pregnant and that giving birth to the child is what killed her. Violet breaks up with Tate, saying she does love him but can't forgive him. She tells him that she was wrong about him; that she's attracted to darkness but he IS the darkness. Saying that Tate has to pay for his actions, Violet uses the method he taught her to get rid of ghosts. As she yells at him to go away, Tate screams and cries. Vivien appears as a ghost to comfort Violet.