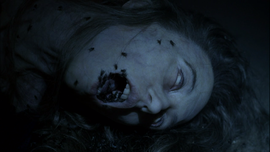 Violet learns about the rules of the house. The truth about Larry's condition is explained. Constance is interrogated by the police.

1994 - It's the night before the Westfield Masscare. Constance serves dinner to Addy, Tate and Larry. Tate says grace, cussing out his mother and Larry. Tate gets angry when Addy says she has a good time with Larry because Tate knows Constance asked Larry to murder Beau. He also blames Larry for Larry's family's deaths in a fire. Tate snorts cocaine and crystal meth. He takes guns and puts them in a duffel bag before doning an American Civil War coat and latex boots. He goes to Larry's workplace and sets him on fire, saying he'll go to the school after.

2011 - Ben visits Vivien and wants to apologise to her but she wants him to leave. He says he knows she's telling the truth about being raped and was advised not to tell her about the paternity of the twins. He admits he thought it was Luke and wants her to come home.

A truant officer meets Ben at the door of the Harmon house. He sees blowflies on apples in the house. Violet has been out of school for 16 consecutive days. She says she's been in her room not feeling well. Ben tries to be a good father but Violet is having none of it. He questions her motives and asks her to go back to school. She agrees to meet him halfway to make sure they don't end up in court.

Constance arrives at Larry's apartment. She wants to talk about Travis, her life's latest tragedy. She puts a knife to his throat - and later, genitals - and accuses him of killing Travis. Larry explains that Travis was killed by ghosts in the house. Constance tells him that she only endured Larry for the sake of her family.

Violet gets dressed for school. Tate attacks her from behind, kissing her and asking her to spend the day with him.

The detectives arrive to question Constance further. She drops her concealed knife, leaving her in a position where she must leave with them. They interview her but Constance holds her own. They ask about Beau and Tate and she plays the grieving survivor. She says her husband, Hugo and Moira went missing in 1983. She cites rumours of a love nest in Brazil, concealing the fact she had Hugo ground up into dog food and Moira buried in the yard.

Phil the exterminator arrives the Harmon home to get rid of the vermin flies that have infiltrated the house. He follows the trail of blowflies to their nest in the crawlspace to find something that horrifies him. Tate kills him with his own toxins.

Ben is talking to a boarding school on the phone about Violet and tuition. He catches a reflection of Tate on a framed picture but when he turns, there's no one there. Violet waits in the attic for Tate to come and play chess. He warns her of Ben's plans to send her away and Tate promises he won't let him. He then goes to the bathroom and puts on the rubber suit.

Larry takes the basement wall apart and finds Travis' clothes. Travis confronts him and asks if he's made the news. He wants to know how Constance is dealing with death and why she hasn't come to see him. Travis has been playing tea party with Larry's daughters' ghosts. Lorraine and the girls are still smouldering. Lorraine says that Larry is ready to see them now. She says he needs to prove to them that he's sorry and that she blames him and not Constance.

Rubber Man attacks Ben in the shower. They throw each other around before Rubber Man tries to gag Ben. He doesn't succeed and Ben pulls the mask off Tate. Before Ben passes out, Tate tells him that the only reason he hasn't killed him is because of Violet. Horrified, Ben calls out for Violet.

Constance's lawyer appears at her front door. He tells her that is to be charged with Travis' murder.

In the attic, Violet is upset. She asks Tate if he's hurt her father to which he replies that he only knocked him out to avoid him interfering with them for a while. Tate wants Violet to commit suicide so they can be in the house forever. He offers her pills he stole from Ben's samples. Violet tricks Tate into believing she'll take them and wants it to happen in the bathroom. When he agrees, she runs away. As she runs to the front gate, a lady is walking her dog. The lady appears to not see Violet but the dog reacts and barks. When Violet tries to exit the gates of the house, she instantly re-emerges back inside the house. She says she doesn't want to die but Tate tells her it's too late for that.Tate wants to show Violet something and takes her to the crawlspace in the house. They eventually come across Violet's corpse, the source of the blowflies. He tells her that everything will be okay and that he loves her. She did however die of the overdose as she only vomited up a small amount of the pills. Tate has known that they are both ghosts and he's been trying to shield Violet from the truth.

Meanwhile, the detectives show Constance that Larry is confessing to Travis' murder although they still seem to believe she has something to do with it.

Larry, in a prison jumpsuit is visited by Constance. He wants to see her before he's sent to Illinois for detention. He says he confessed as penance for all his crimes, not to protect her and that he can endure any punishment as long as she says she loves him. Constance doesn't and leaves.