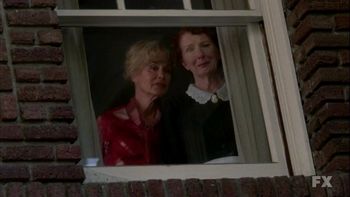 After putting the house back on the market, Vivien learns about its past residents. Ben's visitor causes him to unravel further. Constance and Moira's history is revealed.

1983 - The young Moira is seen cleaning the bedroom of the house. A drunken man comes into the room and tries to grope her. After resisting his advances, the man tries to bribe Moira with the promise of a car. She continues to deny him so he pushes her on the bed, pins her down and begins raping her. Constance enters the room, catching them in the act. She takes out a gun and shoots a warning shot through the window. She then shoots Moira through the eye, killing her. Constance turns to the man exclaiming, 'I've loved you since I was sixteen!' The man is revealed to be Constance's husband, Hugo. She then shoots him three times in the chest. Stricken with grief, Constance sobs on the edge of the bed.

2011 - Ben and Vivien are arguing. They're investments are tied up and they can't move out until they have sold it. They agree to rent an apartment but Ben must continue seeing his clients in the house.

Vivien has tea with Marcy, the realtor who sold them the house. Marcy tells stories about the former owners of the house. Vivien interjects, stating that Marcy should have told them about the history of the house before selling it to them. She wishes to sell the house without a massive financial loss. Marcy explains that the possibility of that happening is low due to the current housing market. Vivien claims that she will blackmail Marcy for 'extreme criminal negligence' should she deny selling the house.

In another room, Moira catches Constance stealing silverware. They both clearly hate each other with Constance calling her a terrible maid and a theif of biblical proportions (alluding to the 'affair' Moira had with Constance's husband). Constance intends for Moira to be blamed for the missing items in the house so the Harmons will fire her. Moira breaks down, furious with Constance and frustrated that she's trapped in the house and unable to move on. Constance continues to say that Moira put herself in her situation.

Ben's newest patient is a woman named Sally. She's approaching a divorce as her husband believes she's boring despite her best efforts. As she talks, Ben zones out and becomes distracted. He regains conciousness in the back garden, his hands bloody. He washes the blood off his hands and enters to see Moira cleaning blood off the hallway floor. She says she didn't see anything and that she's already cleaned his office, ready for the next patient. Ben realises his digital recorder used during his session with Sally is missing. Moira tries to distract and seduce him again. Ben shouts that he's had enough when she becomes aggressive. He grabs her and yells that she's fired, just as Vivien walks in.

In the kitchen, Ben defends his case for firing Moira. He claims her constant attempts at seduction are too much to put up with. Vivien, who perceives Moira as an older woman, is shocked and confused. Moira says that men 'see what they want to see' whereas 'women see into the soul'. She says she is willing to forget the incident and continue her job. Vivien appears to be close to firing her but Moira interrupts, furiously. She claims that she will not be thrown out like trash and demands to be respected. She also threatens to press charges against Ben if he tries to fire her again without just cause. Vivien decides that Ben's head is more screwed up than ever due to his 'indiscretion' and that he feels guilty and paranoid. She then says that she wishes to avoid any lawsuits with Moira.

Outside, Vivien is cutting the rose bushes when she hears the tour guide for the 'Eternal Darkness Tour'.

Later on, Ben catches Violet smoking despite her attempts at hiding it. Ben knows she's smoking and claims that he's not there to bust her. He then says that he's going easy on her in light of recent events. He offers to find a therapist for Violet if she wants to talk about it. As he leaves, Tate emerges. He tells Violet that she's lucky to have a caring dad.

Ben confronts Moira about the recorder once again. She attempts to seduce him again, saying the recorder may be hiding in her dress. She says its absence shouldn't be a problem as his next patient is here.

Confused as he has no patients booked in, Ben enters his office to find Hayden. She tells Ben that she didn't have the abortion, she's moving to LA and wants Ben to support her financially. The conversation is cut short by Detective Jack Colquitt. Hayden makes plans to see Ben the following day. Ben thinks the detective is there to discuss the home invasion when in fact, he's there from the Missing Persons Division. He's searching for Sally, Ben's boring patient. Her husband had reported that she hadn't returned home. After seeing Moira in her skimpy outfit, Colquitt asks, 'How the hell do you get anything done with that thing around?'

As described by Stan, the Eternal Darkness tour guide; the current tour finishes with the Harmon house. Vivien is revealed to be on the tour, listening to the unknown history of the house.

1922-1926 - Stan relays that in 1922, Charles Montgomery was a surgeon who grafted different pieces from different species together. He is also shown to have an addiction to ether. His socialite wife, Nora is disappointed at the austerity they must show due to their lack of funds.In 1925, their son cries as the couple eat dinner. Nora asks the maid to remove the child from the room. Nora states that bill collectors have called again and that she is having none of it. She demands Charles see a young girl named Dorothy and perform an abortion. Dorothy pays Nora $60. Nora then drugs her and takes her down to the basement. Dr Montgomery performs at least a dozen illegal abortions by 1926.

2011 - Stan is about to finish the 'grand finale' of the tour but is interrupted as Vivien sees blood on her trousers. She rushes off the bus and into the house.

At the doctor's office, Ben and Vivien are told that it's just blood spotting; not a miscarriage. Stress is potentially dangerous to Vivien's pregnancy and the doctor chastises the couple for planning to move whilst Vivien is pregnant. Ben is suddenly overcome by flashbacks to his affair with Hayden and passes out.

Constance is out walking a dog. Tate watches her from a window and doesn't acknowledge her when she waves at him. Marcy sees Constance wave, leaving her confused as she can't see anyone at the window.

Ben is out jogging and encounters Larry again, asking for his $1000. Later on, Ben tears his office apart looking for the recorder. He blacks out again and woken up by Constance. He begins digging. Constance claims the soil won't support plants due to the pesticide and suggests building a gazebo instead. Moira looks on from an upstairs window.

Vivien is viewing ads for potential apartments when the doorbell rings. After the recent home invasion, Vivien makes sure to check the peephole before answering. Outside stands Nora who claims she has an appointment to view the house. Vivien arms herself with a candlestick before letting her in. Nora exclaims at the beauty of the house, noticing how every thing has been restored to how its original state. Upon entering the kitchen, Nora is horrified at the modern appliances. Vivien mentions she's pregnant which sparks Nora's interest. Vivien asks Nora if she'd like tea which she accepts. As Vivien turns to get the tea she was making, Nora vanishes.

The detective returns to inform Ben that they found missing Sally. It turns out that she had overdosed and put herself in a coma with no identification. She did however have Ben's recorder which had taped Ben's blackout. Sally was uncharacteristically violent and slashed her wrists with Ben's letter opener. The detective thinks that Ben's lack of action makes him legally accountable for her.

Vivien and Violet tour an apartment. Violet accuses her parents of running away from their problems instead of facing them. She also claims that the house is a source of strength.—-