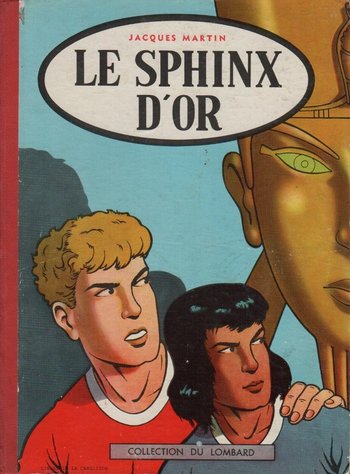 Le Sphinx d'or (The Golden Sphinx) is a comic book by Jacques Martin. It was first published in Tintin magazine in 1949-1950. Then it was published as a comic album in 1956. This is the second episode of the Alix series.

Alix comes back to his Gaulish home village. At the same time, Julius Caesar besieges Alesia. Caesar is also looking for Alix because he wants to assign him a mission.

The rest of the story in a classical spy story, but set in Ancient Egypt. Caesar's agents in Alexandria have all disappeared mysteriously. As soon as Alix arrives there, the bad guys try to kidnap him. They fail and Alix manages to steal a secret document with information about the location of the Supervillain Lair. He gets there, but he is caught. The big bad suggests Alix should work for him (amongst other reasons because Alix's friend Enak is suspended above a pit full of rats—yes, there is a want of Shark Pool in Upper Egypt), and he offers him a lunch and a guided tour of his lair, where he prepares a Secret Weapon to Take Over the World. The Cavalry soon attacks the lair, which finally collapses, but not before the villain has escaped safely.