"Everyone wears masks at some point or another. People act in their relationships all the time. Sometimes, that's how you keep the person happy. However, if the two of you are always having to act, you should ask yourself if the mask is a good fit. Think about it."
—Washimi, to Retsuko 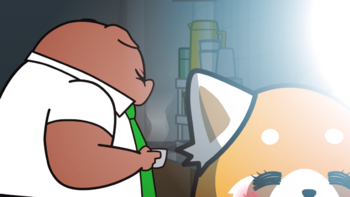 "How long are you going to keep half-assing your own numbers?"

Is Retsuko's relationship with Resasuke ruining her life? Red flags are flying up as Retsuko discovers that a future life with Resasuke may not be the dream she thought it might be, and it begins to intrude upon her work as well as a budgeting deadline looms.