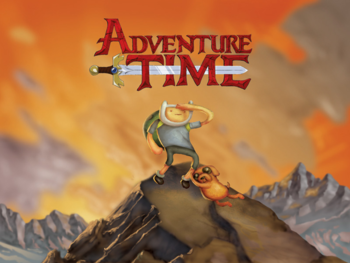 Where it all began.
Advertisement:

As seen on Nickelodeon's Random! Cartoons.

Pen (named Finn in the series) and Jake are hanging out in a field. A creature, who Jake identifies as "Princess Bubblegum's pet rainicorn", flies by while crying. Pen tries to cheer her up by telling her a knock-knock joke. The rainicorn keeps sobbing and flies on. She heads into the Ice Kingdom and begins to engage the Ice King in battle. Pen, peering after her with a pair of binoculars, sees Princess Bubblegum imprisoned in Ice King's lair. He and Jake enter the Ice Kingdom, making their way past various creatures. Pen starts fighting the Ice King while Jake chats up the rainicorn. Ice King lands a direct hit on Pen, encasing him in ice. Pen's mind is transported back in time and to Mars, where he meets Abraham Lincoln and is told to believe in himself.

He returns to the present and breaks out of the ice, in time to see Ice King fleeing with Princess Bubblegum thrown over his shoulder. Pen jumps on Jake's back and they and the rainicorn chase after the Ice King. Pen jumps and snatches the princess away from the Ice King's grasp, and the two of them are caught by the rainicorn as they fall. Jake defeats the Ice King by knocking off his crown, the source of his power, causing him to lose his flight abilities and plummet to the ground. Princess Bubblegum thanks Pen for saving her and kisses his forehead. Pen blushes and leaves with Jake. Jake teases Pen, but Pen changes the subject by pointing out some thieving ninjas, and the two friends run after them in pursuit of a new adventure.