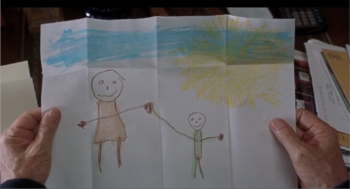 Ndugu's drawing of himself holding hands with Warren.
The movie opens with 66-year old Warren R. Schmidt, a high-ranking insurance actuary and Assistant Vice President at Woodmen of the World in Omaha, Nebraska. Schmidt has been working there for 32 years and now he is mandated to retire so as to open the doors for a new wave of younger actuarial analysts. Schmidt is honored with a glamorous retirement party by Woodmen but he doesn’t want to leave, he was required to leave with full pension from the company so as to make room for younger people even if he's accumulated millions of dollars by now from Woodmen. Schmidt dislikes having to lose his job, as he never planned out his retirement and so loses a sense of usefulness and productivity. He goes to mourn in private and have a drink after Ray Nichols, his best-friend for 40 years, has given an energetic speech about how Schmidt's contributed to the field of actuarial science. When he returns home, he gets a call from his daughter Jeannie that she will be getting married soon, but he secretly but strongly dislikes her fiancee Randall and avoids talking to him. Helen tries to convince him that Randall is a very special person, much to his dismay. Schmidt while watching television decides to start wiring donation money to a Tanzanian orphanage, and his designated foster child will be Ndugu whom he will be exchanging written letters with and also be caring for with the donation checks.

Schmidt admits that he regrets not starting his own insurance company when he was younger, he hates his wife but cherishes his daughter who is now in her 30s and moved out. Schmidt and Helen agree to buy an RV so they can spend his retirement years traveling around the country. Schmidt feels that his wife Helen took away too much of his personal freedoms in his own house that he financed, and considered her an ungrateful wife for being so controlling of his life. On the other hand, Jeannie is just a young girl that Schmidt always adored for her youth and for her kind politeness always obeying her father. He wishes Jeannie would visit more often, and mentions she is working as a customer service representative that often makes her too busy to come. Schmidt tries to regain his job back from Woodmen, but he’s refused and turned away and he finds a younger, less-experienced man has taken away his position much to his dismay. Upon finding that all his actuarial research papers have been shelved away for disposal, Schmidt angrily writes to Ndugu that he highly resents his replacement. While going out to buy Dairy Queen ice cream one day and mail the letter and check to Ndugu, Schmidt finds that Helen has died from a blood clot in her brain mid-way of vacuuming the floor. After Helen’s funeral, Schmidt becomes lonely and mourns that having a senile, elderly wife was better than having no wife at all.

Because of Helen’s unexpected death, Jeannie arrives in Omaha to see her dad in a long time with her fiancee Randall, a slovenly unintelligent water bed salesman who's been trying to escape the water bed store for a while. Excited of seeing his daughter again, Schmidt tries to have Jeannie fill in Helen’s shoes and be his new caretaker especially by tasking her to bring him a ham and cheese sandwich with chips and milk. Jeannie refuses to become Schmidt’s new "wife" nor stay a day longer despite his pleas, citing that she intends to start her own family with Randall and not Warren even at the cost of leaving him by himself so soon after becoming a widow. Jeannie then berates Warren that he disrespected Helen by buying her a cheap grave and that he let Helen give up her own money to buy the Winnebago RV that she always wanted as while Warren fought for the cheaper, smaller Minnie Winnie instead. Jeannie and Randall depart, but not before Randall begs Schmidt to participate in a so-called "investment opportunity" that can triple his money in one year. Schmidt who carries an actuarial knowledge of risk and investment, refuses to give in, being skeptical about it being a legitimate opportunity especially since Randall said it's not a pyramid scheme.

Schmidt decides to live his life in a hedonistic manner by switching to a junk-food diet entirely consisting of Red Baron frozen pizzas which Helen never let him eat. Schmidt then finds letters in Helen’s closet that were written by Ray Nichols, his long-time best friend who was seen at both his retirement party and lamented Helen's death very deeply. Angered by the marital affair, Schmidt inflicts mild punches upon Ray who desperately begs for his forgiveness, but Schmidt storms off in his Winnebago back home. Schmidt decides to pursue his daughter Jeannie, sabotage the wedding and fish her back home so that she can replace the hole that Helen’s death left in his heart and mind. Schmidt drives all the way in his RV to Denver, Colorado where Jeannie and Randall are set to marry. Schmidt makes pit stops at a tire shop in Nebraska where the house he was born and grew up in used to be and then his alma mater University of Kansas to gloat to his fraternity's new generation about how successful and rich he became as an actuary. He stops at a campfire and meets a friendly married couple (John and Vicki Rusk) who make him dinner. Schmidt, struck with loneliness from Helen’s death, is comforted by her who goes as far as to let him lean on top of her as she cuddles him. Delighted by this moment, he forcefully kisses Vicki. Vicki is outraged and kicks him out fighting off his pleas to let him stay, making him flee.

Schmidt arrives at Denver, Colorado and meets Randall’s oddball family of socially awkward people who are every bit as moronic and braindead as Randall is. Schmidt takes a stronger disliking to Randall because of this. Schmidt is then told by Randall’s relatives that the "investment opportunity" he himself was invited to was actually a pyramid scheme that cost them $800 each and their dignity, and they are aggravated just by Schmidt mentioning it. Schmidt orders Jeannie to refrain from marrying Randall and come home with him, protesting in a desperate fashion that the Hertzels are not an ideal family to spend the rest of her life with. Jeannie refuses, and orders Schmidt to either A). Stay and be supportive of her wedding or B). Drive back to Omaha whenever he feels like it. Schmidt tries to go to sleep inside the Hertzels’ house, but finds that his bed is a water bed supplied by Randall.

The next morning, Schmidt wakes up in critical condition because the bed threw out his back. To Schmidt’s surprise, Jeannie explodes in anger at Randall for refusing to help out Schmidt. Schmidt is nursed back to health by Randall’s mother Roberta. Despite Roberta’s kind and caring behavior, Schmidt is put off by her obesity and the fact she’s even older and wrinklier than he is. A nude hot tub with Roberta sends Schmidt running back to his RV refusing to spend time with such an unattractive old woman.

Jeannie and Randall finally marry, and Schmidt reluctantly gives a feigned blessing for them to live happily together which he doubts will ever mean that Jeannie will have a successful life like he did. Schmidt is infuriated that Jeannie has married a failure incapable of breadwinning by choosing to sell water beds and pyramid schemes. Schmidt is also heartbroken and jealous that even though he became rich and successful through his career as an insurance actuary, Jeannie refuses to stay with him. Schmidt worries for Jeannie’s future and in despair, returns to Omaha after saying his goodbyes to her.

Schmidt goes to grieve some more and stay in the house by himself now that his wife is dead and his daughter has left him for a buffoon who has no hope in making any money to support her. Schmidt then finds a letter from Ndugu’s nanny stating that Ndugu has lost eyesight because of malnutrition and he can’t read letters anymore, but before he went blind he drew a sketch of him holding hands with Schmidt. Schmidt is either feeling sad, very touched and moved by this or even a mix of both and starts crying. His crying stops and he gives an ambiguous smile.