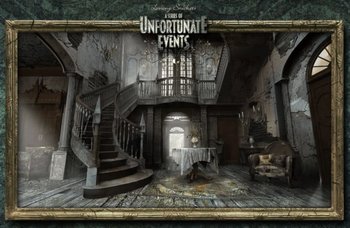 We humbly suggest that you look away.
"I'm sorry to inform that this is not the kind of show you want to be watching. The episode you are about to see is extremely unpleasant. If you wish to see a show about a politician one-uping Washington D.C., then I'm sure House of Cards is on Netflix. However, if you like stories about clever and reasonably attractive orphans, suspicious fires, abusive theater troupes, Italian food and secret organizations, then stay, as I retrace each and every one of the Baudelaire children's woeful steps. My name is Lemony Snicket, and it is my sad duty to document this tale."
— Lemony Snicket

The Baudelaire children, Violet, Klaus, and Sunny (Malina Weissman, Louis Hynes, and Presley Smith) are sent out for the day by their parents. They take a rickety trolley to Briny Beach, which is cloudy and dreary, but the children make the most of their time: Klaus calculates how to skip a stone farther, Sunny bites a stone into optimal rock-skipping shape, and Violet’s invention retrieves the skipped stone. Everything changes when Mr. Poe (K. Todd Freeman) appears to inform them that their home has burned down, and that in the fire both of their parents have perished, a word which here means they died. note We know what "perished" means.

The children meet Justice Strauss (Joan Cusack), a single woman who needs an inventor, someone who loves books, and someone to help slice bread. She is not the children's guardian. Their actual guardian, Count Olaf (Neil Patrick Harris), lives in a dark and dreary house across the street. Count Olaf is a greedy man, a terrible actor, nowhere near as nice as Justice Strauss, and only adopted the Baudelaires for one reason: the enormous for-tune left behind by their parents that they will inherit once Violet, the eldest, comes of age. Noted now, but not important until later, Count Olaf has a tattoo of an eye on his ankle, which also appears as a motif throughout his house.

After the children are immediately put to work cleaning the house, Justice Strauss stops by to offer them some good food. Count Olaf eats it instead, then tells the Justice that the kids don’t want to see her. Justice Strauss leaves, quite disappointed.

After finishing all the chores, the children are assigned one last job: make dinner. They go to Justice Strauss private library for help. She lends them some cookbooks, and after seeing Klaus’s spyglass she goes to retrieve a book that is titled The Incomplete History of Secret- (the rest of the title is cut off). After consulting the cookbooks, the children decide to make Pasta Puttanesca.

They go out shopping, and upon returning home are treated to a musical number - “It’s the Count”, performed by Count Olaf and his Theatre Troupe: The Hook-Handed Man (Usman Ally), The Henchperson of Indeterminate Gender (Matty Cardarople), The White-Faced Women (Jacqueline and Joyce Robbins), and The Bald Man (John De Santis). The kids put a lot of effort into making dinner (even making chocolate pudding for desert), but after presenting it to Count Olaf, are promptly informed that they were supposed to make Roast Beef. Count Olaf retaliates by holding Sunny up high and threatening to drop her and slapping Klaus.

The episode closes with Lemony Snicket (Patrick Warburton) walking through a tunnel filled with Foreshadowing signs, Justice Strauss is shown with a book titled Adoption Law & You, and finally two characters credited as “Mother” (Cobie Smulders) and “Father” (Will Arnett) are shown being carted off in a jail car to a location unknown.