Back to Rare Guns.

open/close all folders
Accuracy International AS50 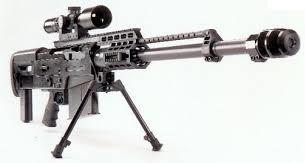 A British gas operated semiautomatic .50 caliber sniper rifle, the AS50 was developed by Accuracy International to replace the Barrett M82 in service with the British military and US Navy SEALs. It features a high rate of fire coupled with great accuracy for a .50 cal rifle due its free-floating barrel, muzzle brake, recoil-reducing buttpad on the stock and lightweight titanium frame, and can easily be disassembled and serviced in less than three minutes without tools.

However, despite being a British weapon, it was never adopted by the British military, with the M82A1 (as the L82A1) remaining their anti-materiel rifle of choice, and the SEALs didn't adopt it either. The only current user of the weapon is the Cypriot National Guard.

The CheyTac Intervention is a bolt-action dedicated sniper’s rifle designed by CheyTac LLC. It’s relatively recent, but made big waves when it was introduced in 2001. It fires either the .408 or .375 CheyTac, rounds designed to be the middle ground between the standard rifle calibers like the 7.62mm and the massive anti-armor .50 BMG. The Intervention also has a long-range laser rangefinder designed to aid in the rifle’s primary function of long-range shooting. While not many military forces use it (currently Jordan, Turkey, Britain, Italy, Czech and Poland’s Special Forces units), it holds the record for the longest distance grouping of three rounds (16 and a half inches at 2,321 yards).

Its most notable accessory is its strangely-positioned carrying handle.

Walther WA2000
A new model of sniper rifle developed to withstand the rigors of Special Forces operations in a world where unconventional warfare is becoming the norm. The WA2000 is heavy and extremely unwieldy, but compensates for this with low recoil, which gives it exceptional accuracy. Its scope has three levels of zoom to allow targeting at multiple distances, and armor-piercing ammunition makes it an effective weapon against heavily armored enemy troops even at long range. If long-range sniping battles are your thing, you can't go wrong with this gun.
—Description, Metal Gear Solid: Peace Walker 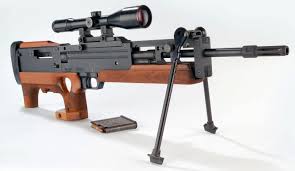 Designed from the ground up as a target rifle

in response to the 1972 Munich massacre, this bullpup semi-auto is exceptionally rare. Estimates vary on how many were produced, but the number was only 170-250 in two versions with minor differences; this was largely due to extremely high costs killing demand. A WA 2000 in good condition is now easily worth $75,000 on the open market. Unfortunately, there aren't any even if you have this kind of money to spare; there are exactly fifteen WA2000 rifles in the entire United States, with 11 owned by the President of Walther's American branch and the rest owned by another collector. That being said, by all accounts, the WA2000 is an exceedingly accurate rifle, hampered by weight, but stated to be superior to just about any other similar caliber rifle. Combined with the inherent speed and accuracy of the .300 Winchester Magnum round, it is considered an exception precision weapon. Whether that's because so few people have been able to fire one, or because of the excessive costs in development led to extreme quality standards, is up for debate.

Very, very popular in movies and videogames, since it has a nice mix of the unconventional (bullpup layout) and the traditional (wood furniture). Due to its obscene rarity, many WA2000 rifles seen in movies are actually Ironwood Designs SG2000 .22 rifles

◊ acting as stand-ins for the WA2000. If a work of fiction wants to get even more ridiculous about rarity, it'll specify that the WA2000 in question is chambered in 7.62 NATO or even 7.5 Swiss instead of the standard .300 Winchester Magnum.