Back to Rare Guns.

No more than fifty

of what is essentially a pump-action version of the M79 Grenade Launcher with a tube magazine are known to have been produced, and no more than six are known to still exist. First produced in 1968, they were intended for Navy SEAL use, though some were used by Marine Force Recon and the Army 5th Special Forces Group. The weapon was lightweight (ten pounds maximum, due to extensive use of aluminum, only four more than a loaded M79) and reliable, though had some issues feeding some of the more oddly-shaped 40mm grenades available at the time, while being able to carry up to four grenades at once.

Davy Crockett nuclear rifle
I am become death, the destroyer of worlds.
—Robert J. Oppenheimer upon the first successful test of a nuclear device. 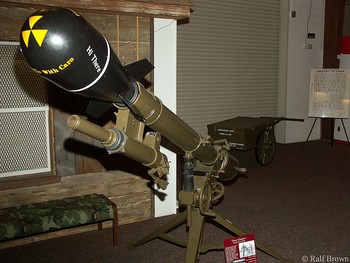 Said warhead also happens to be a miniature nuclear bomb.

The Davy Crockett is famous for being the only infantry portable nuclear weapon ever deployed (but not fired), and one of the smallest nuclear weapons. It was designed by the United States specifically with use for stopping Soviet armor in West Germany, in the event that all-out open and total war broke out. With the Soviets' advances in armor technology, it wasn't known if NATO anti-tank weapons could pierce enemy tanks, so this contraption was designed to rectify the problem. Not only can it (obviously) crack several tanks at once, the radioactive fallout forces the surviving tanks to operate under hazmat conditions, which leaves them substantially less aware of their situation. 2100 units were made and deployed in Germany but several were recalled and moved to Vietnam during the war there. It was hoped that the presence of the launchers would make the Vietnamese reluctant to attack US military bases, but they only caused increased international pressure and were quickly recalled.

The Davy Crockett was formally deactivated in 1968, twelve years after production began and was never actually used in battle. Testing, however, revealed that the Davey Crockett had a rather major flaw, namely that radiation directly from the blast (blast shine) is still lethal to the user even at its maximum range.note The problem was "solved" by having the users dig a foxhole directly by the weapon and jumping into it after firing. In fiction, however, expect the Davy Crockett or similar weapons to still be used to this very day. You can also expect its sub-kiloton warhead to be greatly exaggerated in magnitude if it goes off. It tends to show up more as a MacGuffin than it is used as conventional (pun intended) weapon, as firing off a nuke would dramatically shift the tone of most works. Given the fact it takes a two man team to carry and operate and can level multiple city blocks, if you see the Davy Crockett in a video game, you will at best get a chance to activate the weapon and not aim it at all. 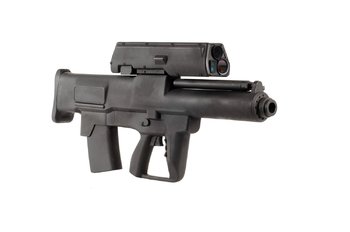 The XM25 Counter Defilade Target Engagement System, or CDTE, is a 25mm semi-automatic bullpup grenade launcher, designed by Heckler & Koch. It was spun-off from the ill-fated XM29 OICW as a standalone weapon.

The XM25 fires 25x40mm "smart" grenades, designed to track the distance it has traveled via the number of rotations it has made, then explode at a user-designated distance in midair at or near the targets (a tactic known as "airbursting"). The grenade has much longer range than the 40mm grenades fired by the M203 grenade launcher, while its airbursting properties allow it to more effectively target entrenched enemies (e.g. being set to detonate one meter past an enemy's cover, detonating in the air directly above them). The XM25 can be fitted with a thermal or optical sight, and is fed by a 5-round magazine. Less-lethal rounds are also available.

The XM25 was first field-tested in Afghanistan in 2010. The weapon performed well at its intended tasks, but by 2013, a number of complaints began popping up. The weapon, at 14 lbs, was heavy, and the large rounds reduced a soldier's ammo capacity, as well as forcing him to give up his rifle, reducing his combat capability. Worse, in 2013, one launcher exploded during a test, causing minor injuries, and resulted in the weapon being pulled from service with its funding eventually being cut. In 2017, the Army formally canceled its contract for the XM25, with the program itself terminated in July 2018. 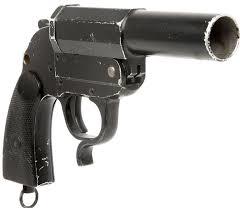 A series of modified flare guns used by the Nazis with Gnarly Weapons. It was an attempt to create a small anti-tank weapon able to be used by pretty much any infantryman. The initial design, the Walther Leuchtpistole, was in use as a flare gun all the way back to the 1920s. In 1942, however, the Wehrmacht issued an order to develop high-explosive ammunition for it. This was used alongside a new model of Leuchtpistole, known as the Leuchtpistole Z ("Z" being short for "Züge", meaning "grooves"). Eventually, a folding stock and indirect-fire sight, alongside a new anti-tank warhead, was designed. And thus the Sturmpistole, the most famous installment in the series, was born. Unfortunately, this idea was a complete failure as the rounds were too weak to be effective against even tankettes, and so it was put on the back burner in favour of the Panzerfaust. Needless to say, this has not stopped the Kampfpistole from appearing in quite a few media.

M202 FLASH
A rocket launcher loaded with four rockets that can be fired one after another, allowing the user to deliver massive firepower in a hurry. On the down side, its weight and bulk make it quite awkward to handle. As such, it is probably best used to provide supporting fire from a distance.
—Description, Metal Gear Solid: Peace Walker 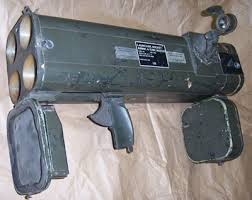 A four-tube shoulder-fired incendiary rocket launcher, the M202 FLame Assault SHoulder weapon was designed to replace heavy and obsolete flamethrowers in the US inventory and was first produced in 1978, being based on an experimental napalm launcher trialed extensively during The Vietnam War. This suitcase-sized, 27-pound launcher is usually depicted in fiction as a regular rocket launcher rather than using the special thickened pyrophoric agent rounds it actually firesnote while conventional HEAT rockets were considered for the M202, they were never produced. It's favored by videogames wanting to give the player a modern-era BFG, due to it looking like someone stripped a rocket pod off a helicopter and gave it a pistol grip and sight. Similar weapons are the more common Russian RPO series, which have only one barrel, but can also fire fuel-air and smoke warheads in addition to incendiary, and the Chinese FHJ-84, which has two barrels in an over-and-under configuration.

The M202 was first fielded in Vietnam in the 1970s; however, it was generally disliked by soldiers due to being bulky, heavy, and having various reliability problems with the rockets, including the tendency to self-ignite during loading of the weapon and to leak dangerous chemicals while in storage. As a result, most M202s were quickly retired from service in the 80's, their role generally being replaced by more modern and reliable thermobaric and incendiary rounds for rocket and grenade launchers, though the M202 has still seen some limited use with the US Military as recently as Afghanistan, and is also currently in service with the South Korean military.

M47 Dragon
A state-of-the-art, man-portable anti-tank missile that just recently entered service in the U.S. military. The launcher is disposable and good only for one shot. The M47 employs an optical, wired guidance system with excellent seeking capabilities. Its warhead is also among the most powerful in its class, capable of blowing almost any target to smithereens. If you think the enemy is going to be tough to take down, don't think twice about taking the M47 with you.
—Description, Metal Gear Solid: Peace Walker 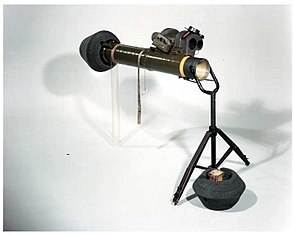 First introduced in 1975, the M47 Dragon was an American man-portable wire-guided anti-tank missile, designed mainly for use against armored vehicles and hardened structures. The launcher features a built-in bipod and removable optics, a utilizes a SACLOS (Semi-Automatic Command Line Of Sight) targeting system, which requires the user to keep the weapon pointed at the target.

The Dragon was not well-liked by anyone who used it for several reasons. Its range was relatively short (1000 meters, increased to 1500 meters with improved variants), and the missile's launch created a signature popping noise and kicked up a large amount of smoke, giving away their position, made worse by the fact that the guidance system forced the user to remain still for a long time. In addition, as a recoilless weapon, the lack of recoil, followed by the sudden loss of the 30-pound missile surprised many operators, who tended to flinch and lose control of the missile.

The weapon was eventually replaced by the FGM-148 Javelin, with the last Dragons retired in 2001, though the weapon is still in use with Morocco, Israel, Saudi Arabia, Iran and Thailand.