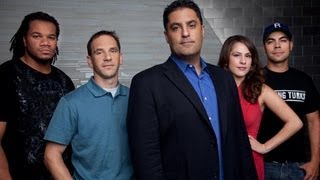 The Young Turks is a radio and internet Talk Show first aired in 2002 hosted by Cenk Uygur (pronounced Jenk Yu-gur), who is (as you might expect) Turkish-American (he was born in Istanbul). The name is a play on the Young Turks

of the late Ottoman Empire, and the figurative use of the term for the youngsters challenging the old guard (in this case, of the liberal establishment), though the other and more infamous face of said Young Turk Party has meant the name is controversial. Other co-hosts and helpers include Ben Mankiewicz, Jayar Jackson, Jesus Godoy, Dave Koller, Wes Clark Jr, Teresa Strausser, RJ Eskow, and Micheal Shure. Ana Kasparian (who is, somewhat amusinglynote That is, given the historical troubles between Armenians and the Young Turk administration, Armenian-American) co-hosts during the third hour, which focuses on pop culture instead of politics.

On 21 September 2011, Cenk announced that he would be starting a television version of the show, The Young Turks with Cenk Uygur, on Current TV later in the year. The TV show was discontinued as Al Jazeera (new owner of Current) reorganizes the channel into it a new network, but the online show will remain. In 2013, the online show topped 1 billion views on YouTube.

Here is a character sheet for the hosts, though it's in need of Wiki Magic. Cenk Uygur now has his own entry here.

The Young Turks provides examples of: