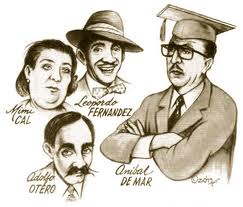 La Tremenda Corte (The Tremendous Court) was a highly popular Hispanic Sketch Comedy series that began in radio on Cuba in the 1940s. After Fidel Castro came to power, the show's staff emigrated to Mexico (but not, contrary to rumor, because they had offended Castro) where they turned it into an equally successful TV show. Both versions are still being rerun across Latin America today.

The basic plot was simple: on each show, the Judge had to solve a case involving the same criminal — a Con Man by the oddball name of Tres Patines (Three Skates) (played by Cuban comedian Leopoldo Fernandez) and his victims. The cases were always zany (the show was very much tongue-in-cheek.) After a lot of witty repartee (often adlibbed, as the show was aired live) between all the characters, Tres Patines invariably ended giving himself away because he just couldn't keep his mouth shut. The judge then sentenced him on the spot, usually to jail time. Not that it prevented everything from happening again the next time.

Some episodes added a short conversation between The Judge and the (male) secretary right before the trial, completely unrelated to the case- time filler, most likely.

While the show itself was highly formulaic, its great humor came from the talent of its performers, specially Tres Patines and the Judge (they were all professional standup comedians.)

Other characters in the show included: Rudcsindo, an immigrant from Spain who was always trying out a variety of businesses, and Nananina, a highly spirited woman. After the show moved to Mexico, they were replaced by other characters.

After Fernandez's death, his son (also named Leopoldo) starred in a remake of the show.