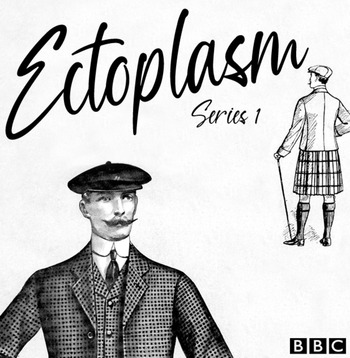 Where do mysteries come from? Nobody knows. But they end here. This is England, and this magnificent pile is Bluebell End. It is the ancestral seat of the famous occult investigator Lord Zimbabwe. His is the realm of the unknown, the field of twilight and the tenebral. He is a walker in the ether, a lord of the ectoplasm.
Opening narration
Advertisement:

Ectoplasm was a short-lived BBC radio sitcom written by and starring Dan Freedman and Nick Romero. It featured the adventures of Lord Zimbabwe, a paranormal investigator, his colleague Doctor Lilac, and his butler Theremin.

It can be found online here

Not to be confused with Ectoplasm, a trope about the slime associated with ghosts and the supernatural.