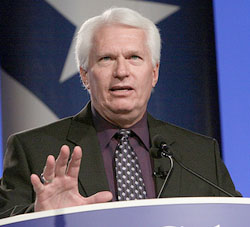 Bryan Jonathan Fischer is a Radio Talk Show host and former spokesman for the American Family Association. He is known for cranking Up to Eleven compared to other Christian preachers, coming out with all sorts of invective directed at liberals, gays, women, non-Christians, non-whites, and what he claims is anti-Christian repression. Even though Fischer's opinions have made him an object of ridicule even in the Christian Right, he has found a loyal audience of 1 million listeners, mostly living in the rural Deep South.

Tropes related to Bryan Fischer include: