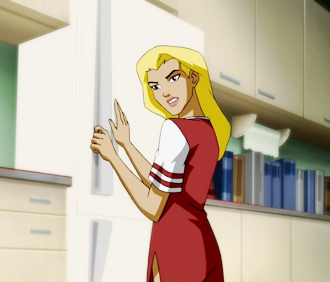 Yes, Artemis isn't wearing any underwear. The censors must be kicking themselves right now.

As of "Misplaced" from Season 1, Young Justice has officially become a Saturday Morning Cartoon as part of the DC Nation Block. Granted, Saturday mornings on Cartoon Network aren't as kid-friendly as the Saturday morning TV shows of yore (though that's debatable, depending on what era you were alive to see them), but some of the stuff the writers of this show get away with on the show is so jarring that one has to wonder what actually got cut. Of course, given how the show is apparently marketed with teenagers in mind as well...