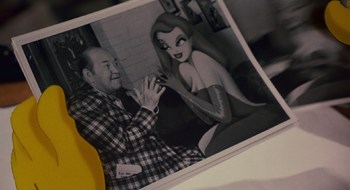 Don't worry, they're just playing a game of patty cake.

Who Framed Roger Rabbit got so much adult humor past the censors, it's a miracle the film received a PG rating.They were trying to appeal to both kids and adults, but this is a bit overboard considering the page is this long. Here are some radar-dodging moments.