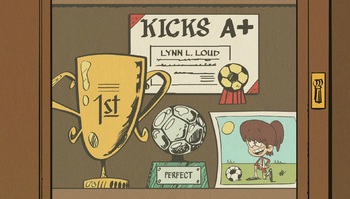 Watch out for this Loud...
Like most Nicktoons, there's no doubt that The Loud House would sneak in a couple of dirty or suggestive moments now and then, although some of them were so clever that one may not catch it the first time.

open/close all folders
General
Season 1
Get the Message

A Tale of Two Tables

Along Came a Sister

Two Boys and a Baby

Intern for the Worse

Cheater by the Dozen